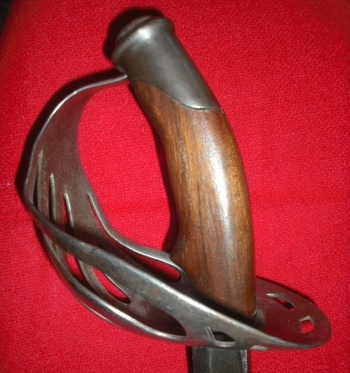 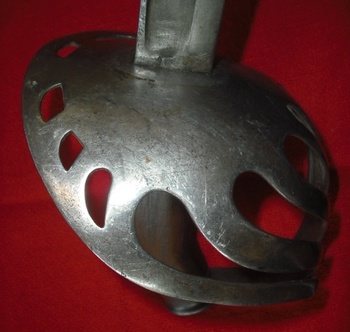 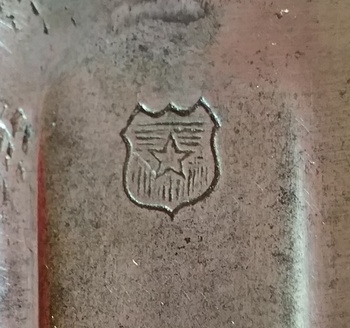 I usually don’t collect South American military. The seller identified this as French because of the script engraving on the spine “Manufacture d’armes de Châtellerault JH”. Since Châtellerault is a French state-owned arsenal, the identification was reasonable. When the sword arrived, I noticed the star in shield mark of Chile at the base of the blade. I would later learn that “JH” was Jacob Holtze, who I believe was the exporter. Oh well, I didn’t pay much and it’s an impressive sword! I decided to keep it anyway.

The age I’ve given for the sword is was based on a web search of the small marks on the other side of the blade from the Chilean mark: C in a diamond for M.P. Chouard, the First Inspector beginning in 1891; B in a circle is for Mr. Brenier, Premier Inspector until 1893; and C in a circle for Mr. Camps, Director of Manufacture during this time. It appears that these three were involved with at least most of the production run.

Identical swords can be found online except with black composition grips in the same shape as mine. I believe the professionally done wood grip on mine was a replacement at some point in its service. The 33 ¼ inch blade has just the slightest of curve to it, in an era where curved cavalry swords were falling out of favor in preference to straight ones.

At the time of the sword’s manufacture, Chile had just fought a civil war to depose a president attempting to assume dictatorial powers. After that the parliament (dominated by wealthy land owners) were in charge. The 1920s were a period of civil unrest with military coups and soldiers firing on striking minors. It’s easy to imagine this sword playing a role in whichever leader was asserting his authority at the moment.