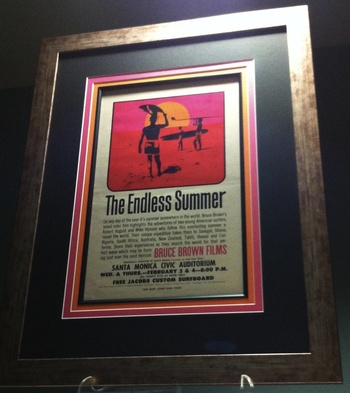 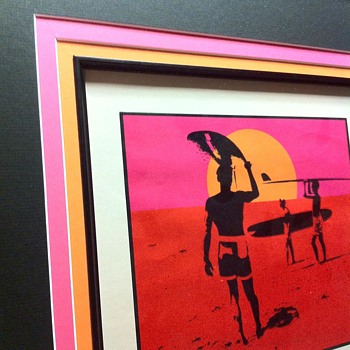 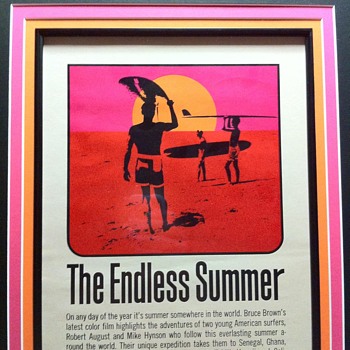 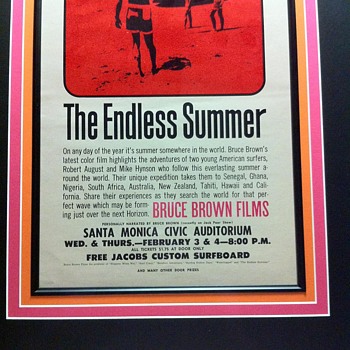 In search of the perfect wave surf memorabilia. This iconic piece of surf movie art is considered a Holy Grail collectible in the surfing community.

Professionally custom framed "boardwalk" wood grain style frame measures 18"W x 24"H with eye catching triple matted colors. The quality shows and it is amazing with no expense spared or corners cut in the framing and future preservation process of this handbill. This will look as good as new if removed in 50 plus years. This art piece will only increase in value over time.

The art piece is an original 11” x 17” United States Handbill poster for The Endless Summer narrated film by Bruce Brown, the classic venue dated February 3rd & 4th 1964 at The Santa Monica Civic Auditorium (this pre-dated the national release in 1966).

The silk screened art is graded near mint condition, uncirculated, not crease folded in center for mailing as others were (as this was for local distribution).

The handbill shows normal toning for age and does not have any pin holes, folds or tears.

The three color printing process can be seen when looking at it across the surface. The vivid & dazzling orange, pink and yellow - ultra bright pop art work colors are still vibrant and have never been exposed to direct sunlight or placed under artificial lighting for any length of time. The handbill was kept flat and in dark storage prior to framing.

This legendary surf documentary film was directed and narrated by Bruce Brown. He follows two well known surfers Mike Hynson and Goofy Footer Robert August on an unforgettable surfing trip around the world to find the perfect wave with some of the colorful characters along the way. With a budget of $50,000.00 and 9 miles of 16mm film, Bruce Brown wrote, directed, filmed and narrated the best surfing movie of all time. Brown came up with the idea after a travel agent told him that it would be cheaper to fly around the world once than it would be to fly from Los Angeles to Cape Town, South Africa, the title comes from the idea, expressed at both the beginning and end of the film, that if one had enough time and money it would be possible to follow the summer around the world making it endless. The group of surfers stopped in Dakar Senegal, Ghana, Lagos Nigeria, Melbourne and Sydney Australia, New Zealand, Tahiti, Hawaii Cape Town Durbin Cape St Francis South Africa following summer around the world, making it seem endless. The film introduced audiences to Cape St. Francis in South Africa for the first time, and ever since it has become one of the most famous surfing spots on the planet. These young California Surfers accomplished in a few months what most never do in a lifetime.

R. Paul Allen was Assistant Cinematographer & Producer of Promotion, Marketing and Presentations of “The Endless Summer”.

John Van Hamersveld: Art Director at Surfer Magazine 1963 and resided in Dana Point, CA. He was a friend of R. Paul Allen. John, Bruce and Paul met and discussed the design at a small café along the coast highway in Dana Point California and hired to design the iconic cool dazzling ultra bright pop art work for $150.00 from a black and white photograph and turned it into a reverse negative using a technique he had learned at the Art Center College of Design in Pasadena where he took night classes. He converted the photo into an abstract design by reducing each color to a single tone and giving the image a single hard edge, creating the iconic silhouettes of Bruce Brown (Foreground with back facing), Robert August (on the right with board on head) and Mike Hynson (Middle background with surfboard under arm). John’s most notable album covers are Magical Mystery Tour by the Beatles, Exile on Main Street by The Rolling Stones, Crown of Creation by Jefferson Airplane, Skeletons in The Closet, by The Grateful Dead, Hotter than Hell by Kiss, Eat to the Beat by Blondie and many more.

Eric Askew of Costa Mesa was asked to do the silk screen Day Glo posters and handbills for The Endless Summer Film.