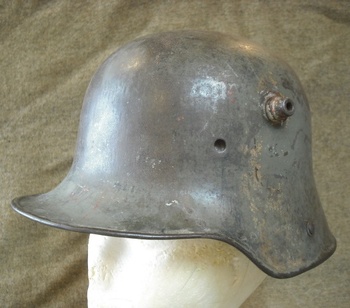 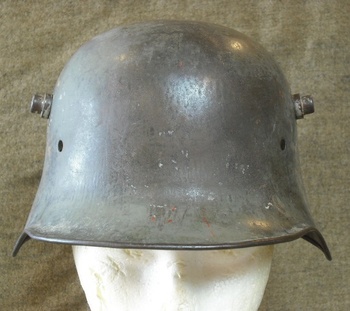 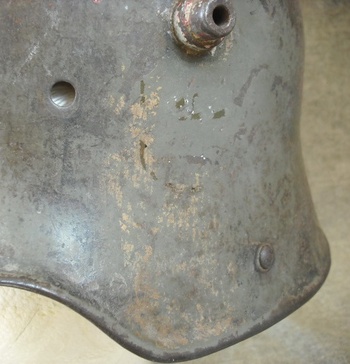 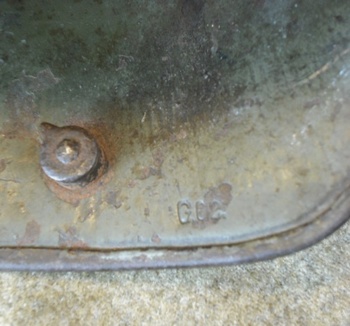 At the start of WWI, all the armies discovered that soldiers were suffering a disproportionately large number of head wounds, and began devising helmets to replace the existing headgear. While both the French and British fielded helmets in 1915, The Germans spent months in R&D and did not get theirs out till January 1916.

The Model 1916 stahlhelm was made to deflect shrapnel and debris. It was never intended to be bullet-proof, which would have made the helmet too heavy for continuous use. Instead the helmet incorporated two lugs that also served as ventilation ports. A 5mm thick steel shield could be mounted on the lugs to provide extra protection to the front of the helmet when additional protection was needed. As things worked out, the shields were not widely issued.

The chinstrap retainers (last photo) were the same as used on the previous leather spiked helmets. In 1918 a new model stahlhelm would have the chinstrap attached to the liner band. You can tell the M1916 from the M1918 from the outside by looking for the extra rivet head. Helmets were made in size 60 to 70, and my helmet is stamped on the inside “G62” which I believe is the manufacturer’s code, followed by the size. If anyone can further decipher this, I’d appreciate it.

My helmet has had a number of paintings, but if you look closely you can see the upper coat is worn away to reveal the “lozenge” camouflage pattern adopted in 1918. This pattern was large chunks of green, yellow ochre and brown, with a finger width line of black paint between the colors.

My helmet was later given a post war era grey-green paintjob, and you can see traces of WWII-style side decals. I’m no expert on WWII German helmet use, but I imagine this helmet saw use by the Volksturm or other reserve/home guard or police element.