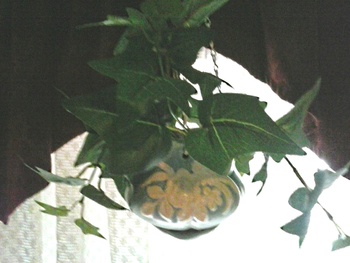 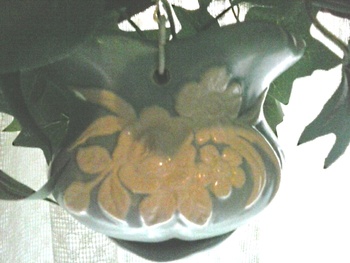 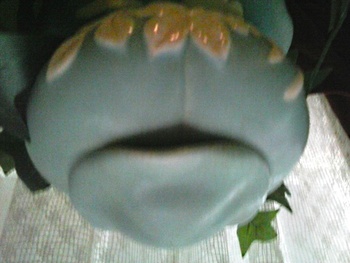 I've had this unusual Weller hanging planter forever and it belonged to my great-grandmother. It was always on an enclosed porch or kitchen never out in the weather. I really don't think she used it as a planter long term. No dirt residue, stains or hard water deposits. No chips or cracks either. I remember the original chain was rusty and had gone missing so I replaced it with a nice plastic coated white one. It won't leave marks around the ceramic holes either. It's about 5" in diameter and I've always keep artificial ivy in it to keep it clean. There is a small drip catcher on the bottom though when watering a real plant. It isn't marked but there are a couple online in different colors and this is part of their "Cameo" line. I think it's kind of a rare form although not terribly valuable as some of their other lines such as Louwelsa or Dickens Ware. -Mike-

Weller pottery was first made in 1872 in Fultonham, Ohio. The firm moved to Zanesville, Ohio, in 1882. Artwares were introduced in 1893. By 1915 Weller Pottery was the largest art pottery in the world. Hundreds of lines of pottery were produced, including Louwelsa, Eocean, Dickens Ware, and Sicardo, before the pottery closed in 1948.