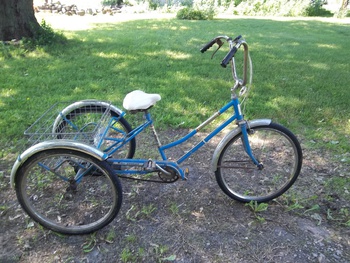 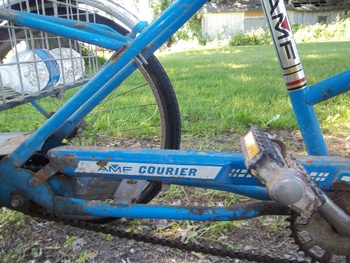 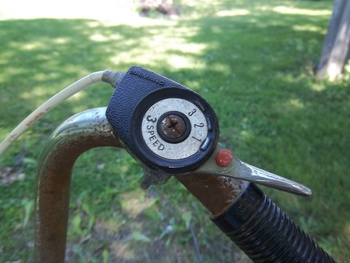 This is my AMF 3 wheel bike. It hase been in my moms side of the family since it was new in 1967. My great grandmother was the original owner and then my mom and uncle got it and played with it when they where kids. When they grew up it was put in there corn crib and it sat ther for about 20 years until 2004. When I was a 2nd grader my grandmother lived on that farm and one day we where over ther and I was snooping around in the barns and I whent in the corn crib and whent in the west isle and there it was. I asked my grandmother if I could have it. She said yes but my dad said no. About an hour later my dad finaly broke from me asking non stop and we halled it home. I was so happy when we got home. It had some rust on the fenders and rims but it was very odd that the chain was not rusted at all! We aired up the tires and that is when we found that the gears were all messed up. That was a fast fix and then it was road ready and in all less than an hour. Around 2007 I stoped riding it and we put it in our corn crib until march of 2011. I have been enjoying it even more and it is now my favorite bike that I own.