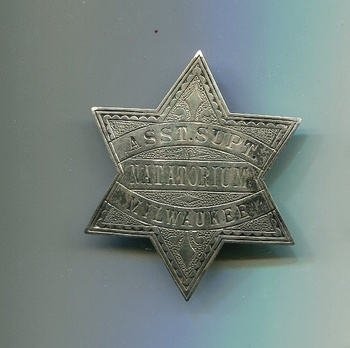 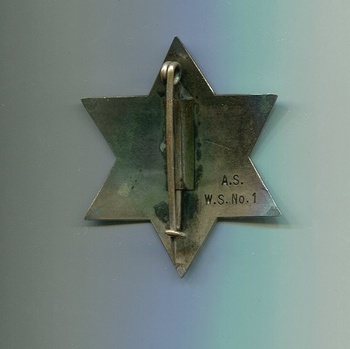 This nickel plated badge is a 51.4 x 60mm, six pointed star shaped badge which had ball tips on each of the six points as indicated by the light tool marks on each point. The ornate obverse is inscribed “ASST.SUPT. NATATORIUM MILWAUKEE”. The reverse inscription “A.S.” above “W.S. No. 1” indicates that this badge is from the West Side Natatorium on North Ave. which would date it no earlier than 1902.

This Milwaukee Natatorium Assistant Superintendent’s badge takes us back in time to the turn of the last century when the term “bathing” also described the activity of swimming as we know it today. It was a time when foreign immigrants were streaming into the city and epidemics were a constant threat to public health. Bathing as we use the term today was not a widespread practice and only the wealthier homes had bath tubs and indoor plumbing. Even the White House did not have a bath tub until President Taft (1909-1913) had one installed and promptly got stuck in it. Epidemic diseases were thought to be caused by the unsanitary conditions of the foreign immigrants and so in 1881 the Common Council called for the construction of the first public bath house in Milwaukee. Where and when it was actually built is not listed in any of my sources. By 1894 however, the city had it’s first “Natatorium” featuring an indoor swimming pool at 1646 South 4th Street. The “South Side Natatorium” was in operation until 1977. From 1979 - 1984 it was a restaurant featuring live dolphins but went bankrupt within five years. In 1902 the “West Side Natatorium” was built at 1609 West North Avenue. Six years later another was built on the East Side at 243 East Center Street. The South West Side got their Natatorium in 1911 at 1645 West Greenfield Avenue. These were all so successful that in 1917 another farther south, South Side Natatorium was built at 2361 South 10th Street. All of these were still listed in the 1977 Milwaukee Telephone Book.