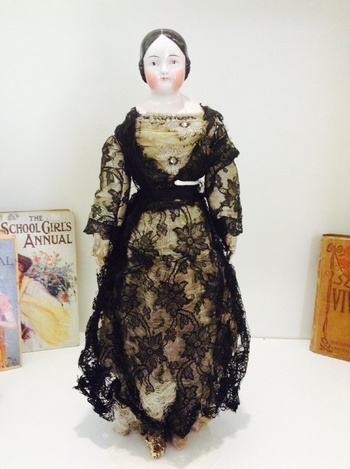 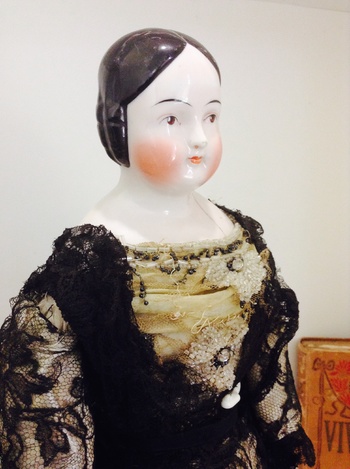 My beautiful 23" china head, Caroline. She has a 'covered wagon' hairstyle ( a shortish plain, practical hairstyle of the mid 19th century, wherein the front is swept down to the ears, is parted neatly in the middle, and 9 vertical sausage curls adorn the base of the head, which dates this example from the 1850's/60's). The name 'covered wagon' comes from the popular and practical style women were wearing under their sun bonnets as they traveled West in covered wagon trains in the mid 1800's.

Caroline was made in Germany for the American market-many German factories produced just the heads (however some bodies were produced with the heads too), the bodies generally were made by mothers, grandmothers etc at home after purchase. The fragility of Caroline's antique clothing make it hard to completely undress her, but close inspection after removing the undergarments tells me her body is home made, all cloth, and stuffed liberally with horse hair. Her hands are made of (now very worn) kid leather and there is stitching to indicate fingers. Unfortunately, Caroline at some point suffered a break in the china shoulder plate-the mend appears to be an old one. This does of course reduce her value, as does any significant breakage or crack in a shoulder plate, but she stands out from many of her kind due to her pink tint (which gives the effect of a flushed appearance) and beautiful brown eyes. The good majority of china heads have blue eyes. Brown is much harder to come by.

Caroline bears the marks of a much-loved and played with doll. Apart from the aforementioned mend, she has a slight nose rub, and some wear to the paint on the back of her head. She has a peaceful, serene countenance. Her full cheeks have a rosy glow, her lips are a vivid beautiful red and are slightly set apart-she looks to be smiling. Caroline has three sew holes on each side of her shoulder plate; the inside of her head bears an impressed marking of what may be a '4' or a 'u'-it's difficult to tell (if it is a '4', this would most likely indicate a size number), and a tiny marking in red-most likely just a scribble.

Her clothing is antique, and my close inspection tells me she has most likely been wearing her outfit since she was bought, if not shortly thereafter. It looks a little ragged and time worn now, but it is hers and suits her perfectly. She wears a silk dress with tiny, intricate glass bead work, a black lace overlay with a floral pattern, a black ribbon with a bow at the back, and layers of old, home-made undergarments. The silk is shredding as silk tends to do after many years. A pair of antique knee-high socks and one lone leather shoe remain. On the underside of Caroline's petticoat, a small piece of fabric with the name 'Alberta Watson, Salem' is sewn. Was this the original owner, or a later caretaker? More than likely one of the two. What stories does Caroline have to tell, having seen so much, and traveled so far (she was purchased in the U.S, and now resides in Australia)?