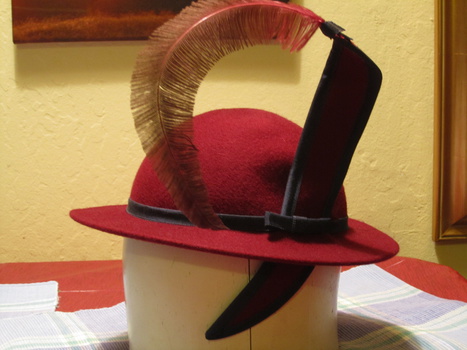 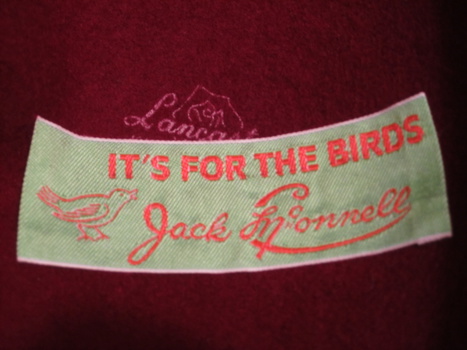 I just bought this hat on Ebay, and the label says "Its for the Birds, Jack McConnell." His name is in the familiar script. The words are machine embroidered in a pinkish red on a green woven label. See the photo above. The body of the wool felt hat is stamped Lancaster, which I found from internet research to be a company that manufactured hat bodies that were sometimes used by other designers in the 1960s-1980s. There is also a Saks Fifth Avenue label in the hat.

Anyone have any information about this mystery label? Also, I'd like to know more about Jack McConnell. Is he still alive? When was he creating the red feather originals? How long was he still designing hats for Jack McConnell Boutique? I know that the Jack McConnell Boutique label is now owned by a mass producer of hats, and they put out a line of new hats every season. I read on the internet that the red feather sewn under the "Styled by Jack McConnell" label means the hat was a one-of-a-kind creation by Jack himself, and that celebrities often commissioned hats by him. That's about all I know about him. If you know any other facts, or leads to how I could find out more, please let me know.