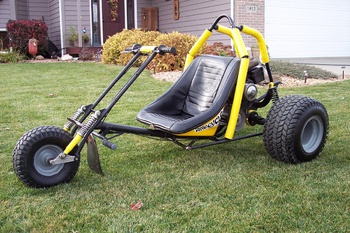 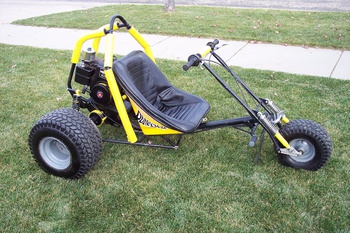 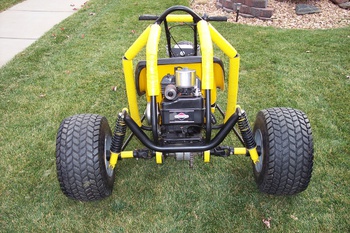 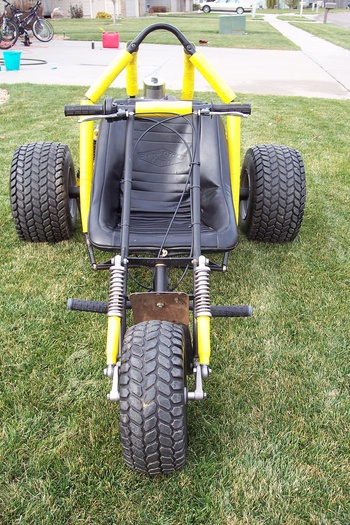 Years ago I was driving through Northwest Iowa when I spotted what appeared to be go-kart wheels, motor, and a frame in a pile in someone's front yard. I stopped and the guy was preparing for a garge sale. He said that it was a vintage go-kart and he had more pieces and parts he would dig for. I came back the next day and was able to see past the rust and poor condition. I was putting this thing back together in my head and I decided that I could not let this thing see another year in pieces. I bought it and put it in the back of my minivan. There wasn't much info available on it at the time, so I just learned by trial and error. I spent an entire summer rebuilding this Dunecycle and have since learned that it is one of the most complete Dunecycle's around. It is a Springer model because of the front & rear springs that you can see in the photo's. It has the original roll bar and a Briggs engine. My favorite part is the fact that it still has the original seat and cover with the embossed logo. "Allied Pacific Engineered Dunecycles were offered in the 70's with horsepower ratings that ranged from 5 to 14. The three-wheeled vehicles, first introduced by A.P.E., started a whole new form of competition. Not a motorcycle, not a dune buggy, they're in a unique category that appeals to people with leanings toward either two or four wheels." Before Honda came out with the 3-wheeler these were running on the beaches of California as well as on the farms of the midwest. The front tire could also be replaced by a ski attachment option for driving on the snow.

It is very cool. 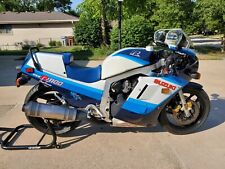 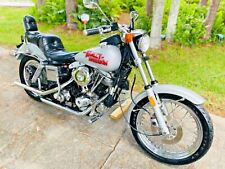 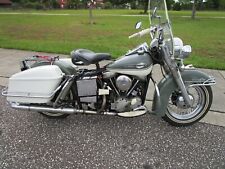