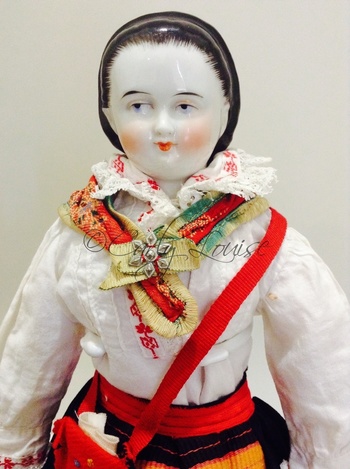 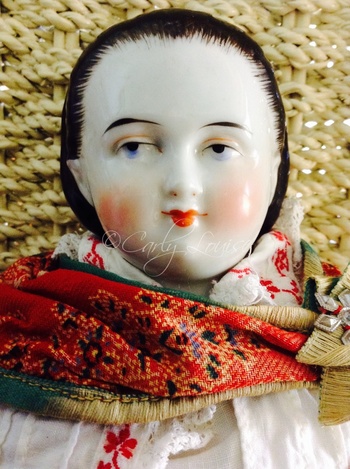 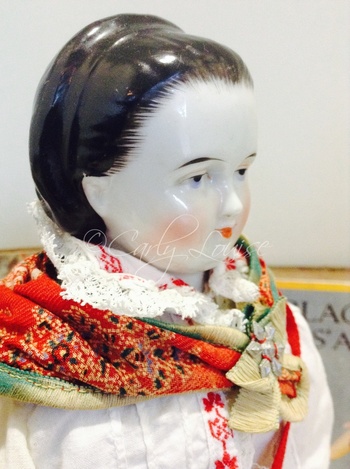 This china head doll is equal parts delightful and captivating in her old time beauty; an affable personality, smiling and benevolently side-glancing on the shelf at her china head kin.

Alice is a 14" petite example of loveliness and abundant character. She was made in Germany by porcelain factory Conta and Boehme (if you're a reader of some of my posts, you'll be familiar with my penchant for this manufacturer-china head dolls with endless personality and fairings humorous, endearing and decorative-they made some of the coolest stuff during their Victorian and early Edwardian heyday) in around the 1860's. As the name suggests, the hairstyle of this example is of course modeled on a famous Alice you'll likely know of, the Alice In Wonderland variety.

The cloth body has been either recovered or replaced at some point, though it has a bit of age to it. It's expertly done and very firmly stuffed. Alice's limbs are china, antique and so lovely. From memory, her spoon hands are impressed with a sizing number, the china legs have black painted boots with the slightest heel. She didn't emerge from the Victorian era completely unscathed-one foot has broken off at some point and is still MIA, the other is chipped a bit at the toes.
From the waist continuing down to the bottom of the legs, Alice has wire inside her body to render her pose-able. The wire's pretty stiff, so these days she has a hard time remaining in a seated position.

Alice's wardrobe is sizable and vintage. It contains bloomers and lace-trimmed petticoats, skirts, a white button-up dress, paisley shawl, a small over-the-shoulder bag and a large black, orange and red skirt, which represents a partial Swedish regional costume, so I'm told by her former owner.

Alice's eternally youthful face is beyond divine-flushed cheeks, ice-blue eyes, a petite mouth that forms a gentle smile. The ears are molded and exposed, a molded alice band sits just behind them, her hair is short and wavy at the back, ending at the base of the neck. Her brush marks are amazing.

She bears markings on the front of the shoulder plate-three small dashes confirmed to be that of C&B (who's markings were often inconsistent-many were unmarked).

Alice now relaxes in comfort, forever smiling and amused, and enjoys her twilight years with other china head ladies and gents from a similar time.