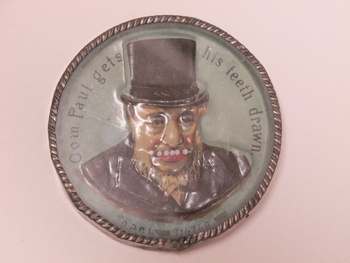 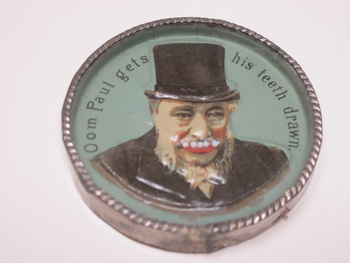 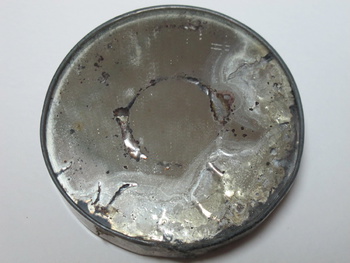 A couple weeks ago I arranged to go to an estate sale because they told me about some blue and white vases that they were going to be selling, and I love them so I was there early (still wearing my pajamas basically). I had a good 15 minutes before anyone was there! I purchased a bunch of stuff before I came across this: A dexterity game you hold in your hand and try to get these little white balls into Oom Paul's mouth. When I asked How Much? She said "a quarter," I said "Cool, I want this". I thought it would be a good item to keep in my purse in case I get bored.

Today I decided to get it out and see if it was really old or worth anything. I had know idea... It was originally made in the early 1900's as a fun toy/ war propaganda. Strange combination, Right? Paul Kruger was a person involved in the Anglo-Boer Wars. The toy made use of one of Aesop's Fables the Lion in Love to resonate with children. So this "lion" Paul Kruger would lose his teeth, and lose his power. He was also a pipe smoker, and there is even pipes that are named after him, Oom Paul.

I know there are a lot of reproductions out there, is this something that was reproduced? It looks old.