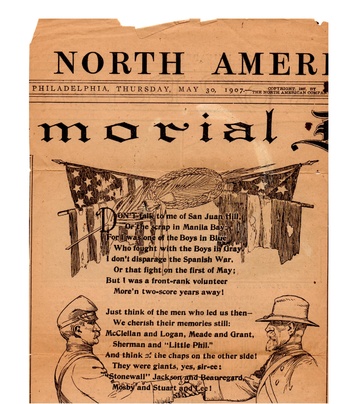 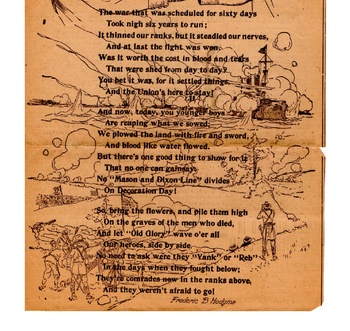 For Memorial Day I thought I’d share this May 30th, 1907 Decoration Day clipping from The North American, a newspaper published in Philadelphia. Our Memorial Day began as Decoration Day, a day to place flowers on the graves of our Civil War Dead. In this poem, an aging Civil War Veteran gently chides young Spanish American War veteran:

Don’t talk to me of San Juan Hill,
Or the scrap in Manila Bay;
For I was one of the Boys in Blue
Who fought with the Boys in Grey.
I don’t disparage the Spanish War,
Or that fight on the first of May;
But I was a front-rank volunteer
More’n two-score years away!

Just think of the men who lead us then-
We cherish their memories still:
McClellan and Logan, Meade and Grant,
Sherman and “Little Phil.”
And think of the chaps on the other side!
They were giants, yes, sir-ee:
“Stonewall” Jackson and Beauregard,
Mosby and Stuart and Lee!

The war that was scheduled for sixty days
Took nigh six years to run:
It thinned our ranks, but steadied our nerves,
And at last the fight was won.
Was it worth the cost in blood and tears
That were shed from day to day?
You bet it was for it settled things,
And the Union’s here to stay!

And now today you younger boys
Are reaping what we sowed;
We plowed the land with fire and sword,
And blood like water flowed.
But there’s one good thing to show for it
That no one can gainsay:
No “Mason and Dixon Line” divides
On Decoration Day!

So bring the flowers, and pile them high
On the graves of the men who died,
And let “old Glory” wave o’er all
Our heroes, side by side.
No need to ask were they “Yank” or “Reb”
In the days when they fought below;
They’re comrades now in the ranks above,
And they weren’t afraid to go!

Wishing you all a peaceful and thoughtful Memorial Day,
Chris