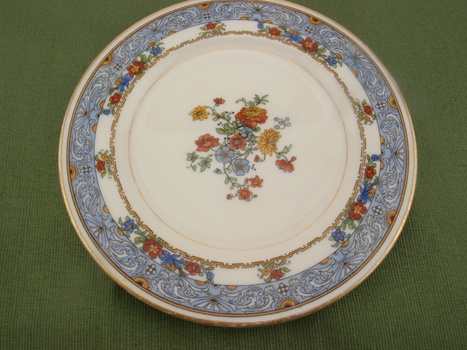 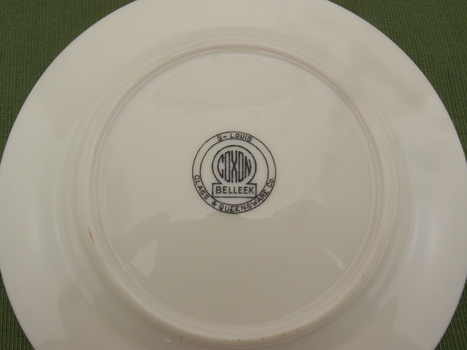 Here is a Coxon Belleek Boulevard pattern plate made between 1925 and 1931 - this was the entire length of time that Coxon Belleek Company was in business.

These are quite hard to find in my experience (anything by Coxon Belleek) but can be quite lovely in design and colors.

Coxon Belleek was an American company between 1925 and 1931 based in Wooster, Ohio. It was started by two sons of Jonathan Coxon Sr., J. Fred Coxon and Edward Coxon along with Edward's son Edward Coxon Jr. Jonathan Coxon Sr. was instrumental in helping get the company set up since he was a pillar in the china industry. He emigrated from England to New Jersey and apprenticed and worked in numerous china companies in Trenton.

He worked as a Superintendent for Ott and Brewer, a Foreman for International Pottery, a Superintendent for Anchor Pottery, a Sr. Modeler at The Mercer Pottery Company and Bennet's Pottery... and oh yeah, started The Ceramic Art Company with Walter Lenox. Unfortunately for Coxon, he sold out his shares to Walter Lenox in 1896 - some 20 years before it was renamed to Lenox China Company.

The Coxon family has many roots in china making throughout the United States. The principals of Coxon Belleek worked at Great Western Pottery in the late 1800s in Kokomo, Indiana before going on their own to start their business.