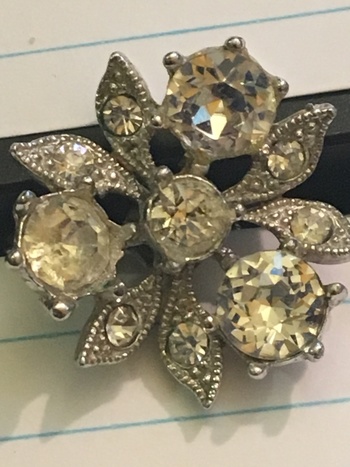 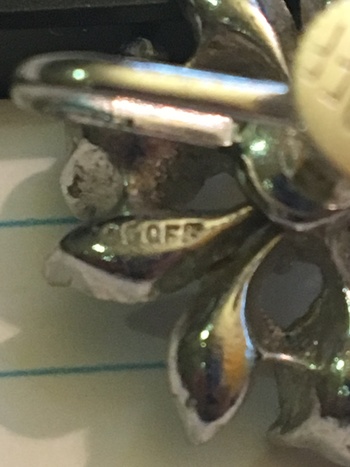 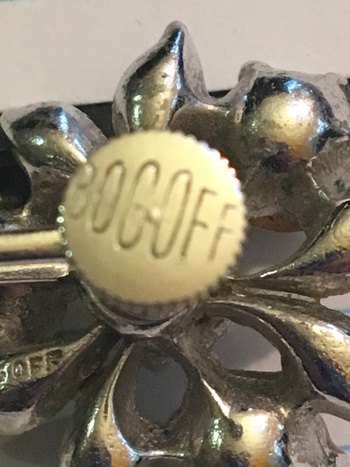 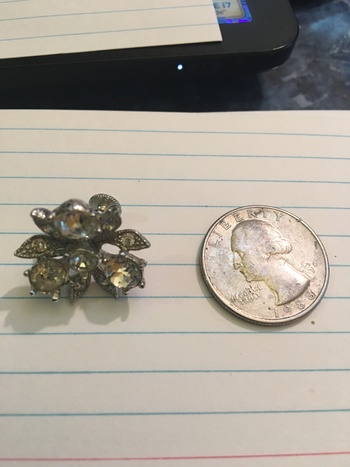 I learned today all about Henry Bogoff. He had a fishing cabin in Wisconsin. He sold his jewelry out of Chicago, and throughout the Midwest, from 1920 until his death in 1958. The timing is perfect. My mother was born in 1929, and grew up in Chippewa Falls, WI, and went to high school in Stillwater, MN and Sioux Falls, SD. She went to college in Winona, MN, and taught music afterwards in Mitchell, SD. and at Ben Franklin In San Francisco, the latter from 1955 to 1957. I share this information in case it helps find where she may have purchased the set. She had a necklace and earring set. My memory is the necklace said "TRIFARI" on the clasp, and on the back. The style was graduated settings, with rhinestones around to chain that clasped. There were rhinestones on the clasp as well. She died when I was 12.

The earrings were as above- I have only one left. I noticed today the imprint of the earring "BOGOFF". I searched that, and found tons of information, but no images of my mom's exact necklace. I'll keep looking. I wore the set to the Black & White Ball In San Francisco in 1985. At one of the venues, I felt the clasp give, and to my JOY, caught the necklace! I had made a bag to match my gown, and thought I had placed it in the bag, It turned out it slipped into the folds of the gown, and I didn't discover it missing until Sunday. Everything was closed. On Monday when I called, they said nothing had been found. I should have gone there, and searched dumpsters or whatever, but I didn't. I was heartbroken, and periodically have posted things on social media, hoping someone would realize the sentimental value it has to me, and return it.