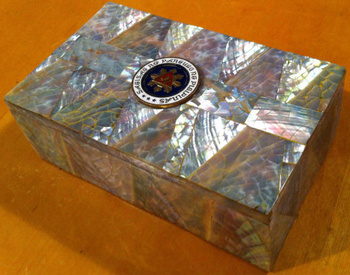 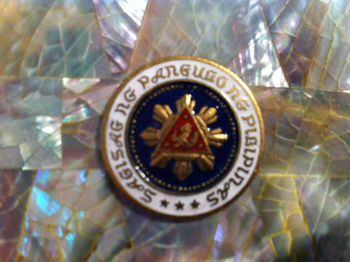 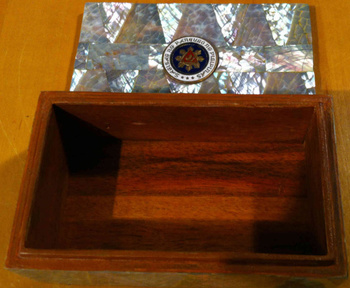 Gifts from heads of state are nothing new. Not all gifts feature the seal of office itself, though, unlike this unusual presentation mother-of-pearl box inlaid over Philippine mahogany from President Ferdinand Marcos during his first terms of office from 1965 to 1972 (before martial law was declared from 1972 to 1981 and his ouster).

The presidential seal on the cover is bas relief brass with blue and white enamel. Originally designed by Captain Galo B. Ocampo of the Philippine Heraldry Committee for Presidential Manuel Roxas in 1947, it was based on the seal of the president of the United States after its adoption two years earlier.

"Some of the symbols in the arms are derived from the National Flag, and retain their meaning. The eight-rayed sun represent the eight provinces placed under martial law in 1896 at the onset of the Philippine Revolution. On the sun there is an equilateral triangle (colored red as opposed to the Flag's white), representing liberty, equality, and fraternity, which were ideals of the Revolution. The stars at the corners of the triangle represent the three major island groups of Luzón, Visayas and Mindanao.

At the center of the coat-of-arms is a Sea-lion, which is derived from the coat-of-arms of the City of Manila granted by Philip II of Spain in 1596. It has the upper half of a lion, and the lower half and curled tail of a fish. The Sea-lion as a heraldic device ultimately comes from the lion on the coat-of-arms of Castile and León; since the islands were an overseas (ultramar) possession, the lion became a sea lion." (from Wikipedia entry)

The legend around the coat-of-arms are the words "Seal of the President of the Philippines" in Tagalog, an official Philippine native language.

The stars surrounding the seal is for each of the 78 provinces (52 in the original design) which is a similar design for the seal of the president of the United States which has an equal number of stars for the number of states.

The presidential seal of the Philippines has changed several times since its first adoption in 1948; in 1951, 1981 (where an eagle was used instead of the sea lion), 1986 (the sea lion returned), 1998, and 2004. All the rest of the design changes were either for color or stylistic reasons. 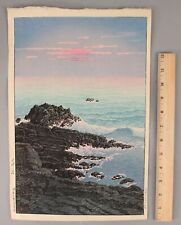 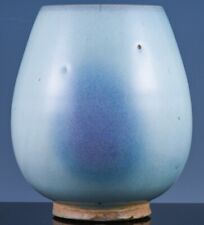