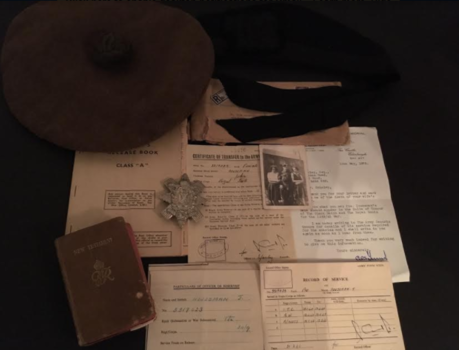 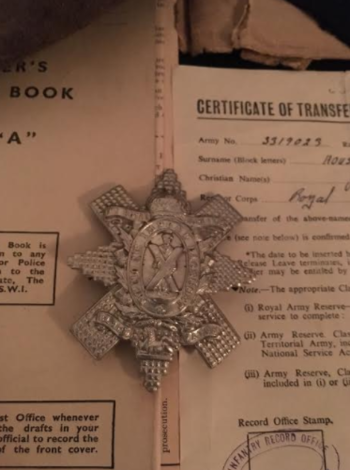 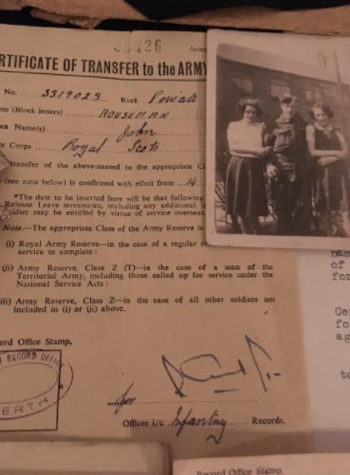 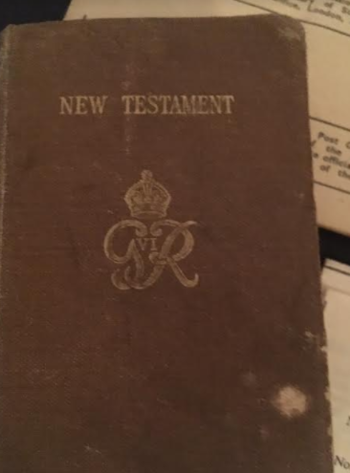 A nice WWII grouping to Private John Houseman of the Black Watch and later the Royal Scots. Everything in this grouping is in good condition for their age, and has been stored well by the family for all these years. The lovely grouping has now found its way to me, and I will make sure it stays in good condition, for proper respect to the artifacts, and for the soldier that once owned them. Groupings like this to the Black Watch/Royal Scots are quite rare, and it's not everyday you get a picture of the soldier, and even still, wearing an item included in the grouping. Overall I think this is a really nice grouping to a soldier that served in the second world war with two famous Scottish regiments. The grouping includes:

Picture of Private John Houseman probably wearing the glengarry in the grouping (and also I assume the Black Watch badge also in the grouping), he is in Black Watch uniform, this is probably early war, or just after he just signed up I assume. He stand with two ladies (at least one of them I assume is his sister), and behind them stands a building of some sort. Pre-1942. On the back of the photograph it reads "John Houseman Black Watch".

Nice cap badge to the Black Watch, probably the one pictured originally being worn on the glengarry. I have yet to put in back on the glengarry, if that is even possible. I think it might have been taken off the glengarry for service with the Royal Scots. Pre-1942.

Private Houseman's WWII Military New Testament Bible, with cypher of King George VI. Inside also is a message from the King addressed to the servicemen, essentially saying this is a good read.

Certificate of Transfer to Army Reserve, has his name, service number and regiment (Royal Scots) written on it. Post War, dated 20.2.1946. Stamped by the Infantry Records Office in Perth, Scotland.

-Particulars of Officer or Reservist paper:

Paper with his named and service number on it, stamped by the Infantry Records Office in Perth, Scotland.

Letter from a the Secretary of the Records Committee of the National War Memorial of Scotland, addressed to a Mr. Scholey (apparently Husband to one of Private Houseman's sisters, probably one of the ladies pictured with him in his Black Watch uniform). It is dated 11th of May, 1973. It talks about the death of Private John Houseman (who I assume died sometime before this letter). It also states his name should be in the Rolls of Honour of both the Black Watch and Royal Scots. This confirms that Private Houseman passed away. sometime prior to May 11th, 1973.

Overall a stunning grouping to a soldier who served with two famous Scottish regiments, his family obviously kept these artifacts with a great deal of respect and care, and now they will be on display proudly in my collection, so this soldier's story is not lost.

I hope you have all enjoyed reading this, as I have enjoyed writing it.