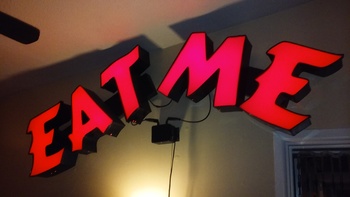 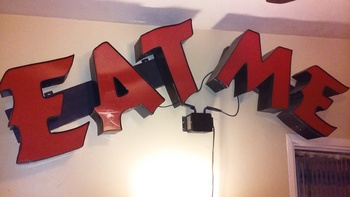 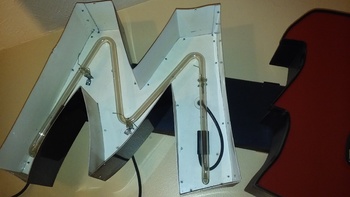 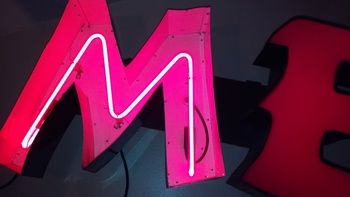 OK...so's abouts the rest of that 'steak and sushi' restaurant sign pictured a little while ago this evening...

Unlike that one, the other 2/3 of the entire sign (which once more I must thank my buddy for finding for me!!) consisted of two sections of what are called "channel letters" in the sign trade -- individual sheet metal boxes w/plastic fronts, cut out/folded/riveted together into the shape of single alphabet letters and containing custom bent neon tubes to illuminate them, which are in turn fastened to another smaller 'utilitarian' long metal box behind them to hold the wiring and stuff. Chances are good that any odd lit-up sign hanging on the front of any given store/restaurant/yada yada building in your own neighborhood is made in much the same way (as either/both) as matter of fact, but that the 'light source' inside is now trending towards various varieties of LED's. (and that doesn't really matter here) The 3rd/4th pics are the letter M with its cover off, to show how these are constructed.

In this case, the two further sign sections held half a dozen or so letters each likewise about 8' long, arranged into otherwise totally *boring* words, so I got creative. ;-) Made a chart of the individual letters (too many vowels, Vanna?!) then imagined what different words could be formed from them...this resulted to be the most amusing choice in my estimation. <LOL>

I ended up making new shallower 'channel' boxes from scrap MDF to re-fasten some of the letters to, then rewired them to a smaller high voltage transformer otherwise scavenged from a broken 'beer light'. (the small black box on the wall between/below the letters in the pics) And the wall it is shown on is, in fact, my current 'home office'. ;-) 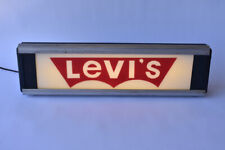 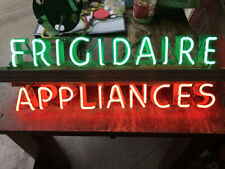 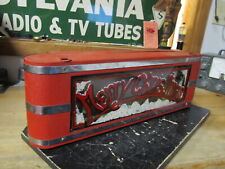