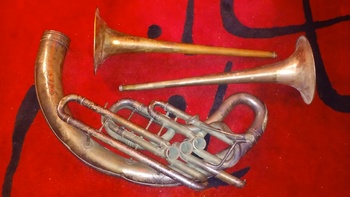 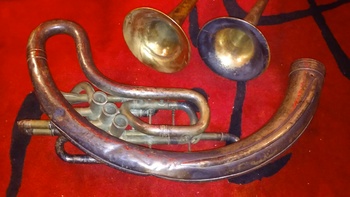 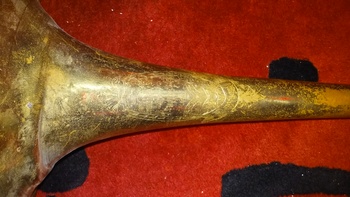 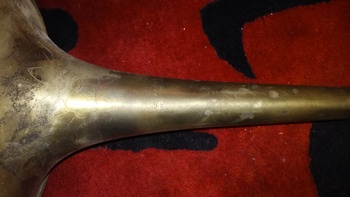 For y'all's consideration, from the "weird sorta-musical things I've picked up over the years" department. Here we have the bells from two trombones, and a chunk of the plumbing that used to be a sousaphone.

The trombone bells are brass, both still having some remaining fancy engraving from their makers. One, though dented and tarnished, is basically in original condition -- the other has been slightly attacked by some kind of sanding/grinding machine (I guess?) and also has some black spray paint on it. [I actually have a third of these, not shown here because it has mostly been sprayed with a thick layer of white paint, thus isn't very interesting to look at...] The sousaphone part is actually silver plated brass (under all the tarnish) and doesn't have any maker's ID marks on it at all.

The trombone bells came from eBay years ago (back when eBay was fun!) because they were cheap and I thought they might be entertaining to have laying around the organ shop. [a theory which has proved itself correct a few times since, actually ;-)] The sousaphone chunk was actually a 'freebie' from some random guy who I otherwise gave away a small pile of old doors to, also years ago -- it was already laying in the back of his truck and when I remarked about it, he said "do 'ya want it?" Silly question, that... ;-) ;-) ;-)