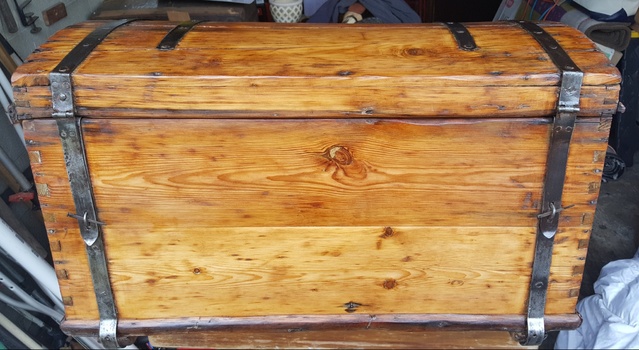 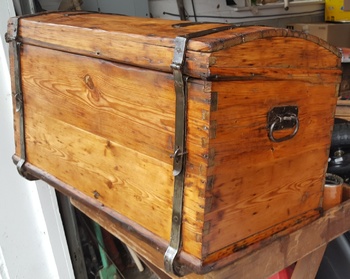 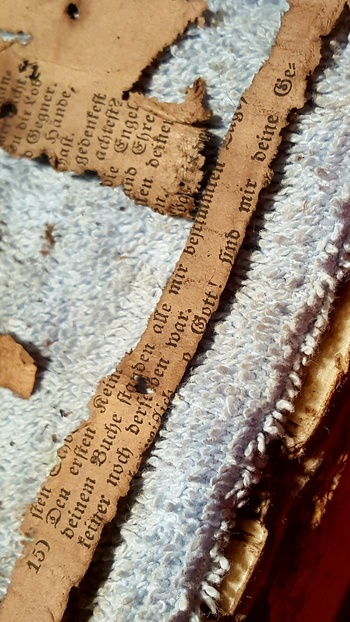 Recently found this beauty and just finished reconditioning her. She was in fairly rough shape but entirely intact. All hand forged hardware, 33x17x17 and is much larger than others in my small collection......no identifying markings.......and original paper lining appeared to be long since gone, however while inspecting the interior there were four small wooden slats probably used as grooves for a side compartment. I decided to remove them and see what might behind them and low and behold I found the remains of the original paper lining. My first thought was that it was news paper and I quickly realized the type was in German........ so now I have several long slivers of what I thought was a newspaper but after doing some on-line translation I have discovered the pages appear to be pages of a bible.....now how cool is that? They lined there trunk with pages of their bible......maybe to evoke blessing for their trip....who knows but interesting. I am waiting on some documentation regarding its history but unsure if I will ever get it.......so if anyone can shed any light on its origins.....I would appreciate any insight...I was told it possibly was made in the late 1780's or early 1800's....if anyone sees something in the hardware/construction that tells its story.....please let me know.......All I know now is that its origin is Germany.....Randall