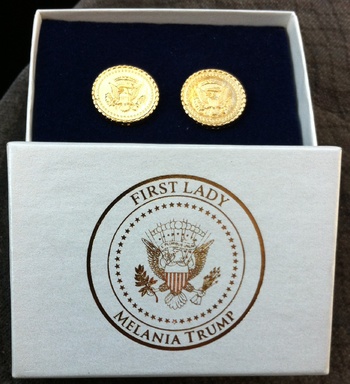 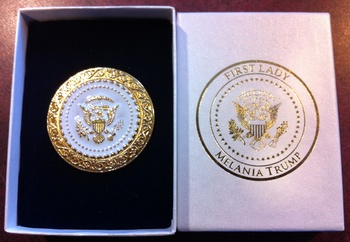 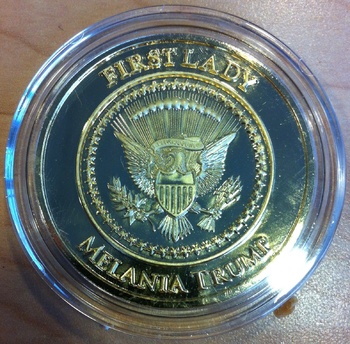 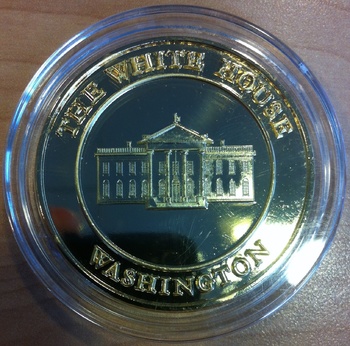 We all know that there are many things not quite traditional about the current presidential administration in Washington, D.C. these days, including some of its official memorabilia.

One of the most untraditional, for example, are the cufflinks (first photo) issued by the Office of the First Lady, Melania Trump. Memorabilia of First Ladies of the past have included charm bracelets, silver boxes, book markers, brooches, pins and other small items, but never cufflinks. A traditional brooch design (second photo) has also been authorized along with a challenge coin (third and fourth photos), a most recent souvenir begun by Michelle Obama.

One of the most unusual design features of all three items, though, is the use of the presidential coat-of-arms. Of all the past souvenir items issued strictly for use by the First Lady's office since Lady Bird Johnson, each usually featured a rendering of the North Portico of the White House or a stylized American eagle as the main design feature, because the Office of The First Lady has no official seal or coat-of-arms. It's the use of the presidential coat-of-arms for the current First Lady that makes these items stand out from the items of First Ladies of the past.

The federal statute that deals with the use of the presidential seal and coat-of-arms is 18 U.S. Code 713 which states, in part: "[w]hoever knowingly displays any printed or other likeness of the seal of the...President... of the United States...for the purpose of conveying, or in a manner reasonably calculated to convey, a false impression of...approval by the Government of the United States or by any department, agency, or instrumentality thereof, shall be fined under this title or imprisoned not more than six months, or both."

Of course it's possible that the White House staff is not well versed in the proprietary use of the presidential symbols of office. It's happened before, even with the most experienced staff. However, this is the very first time that the Office of the First Lady has utilized the symbols of the presidency for its own use.

Perhaps the simplest solution is to create an official seal for the Office of the First Lady. After all, the other two dozen or so offices within the Executive Office of the President have their own. 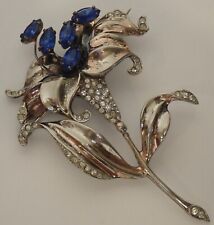 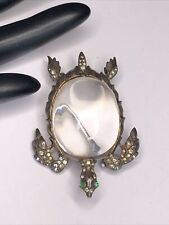 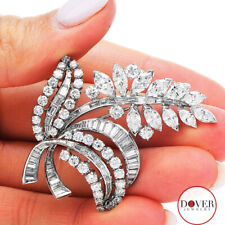