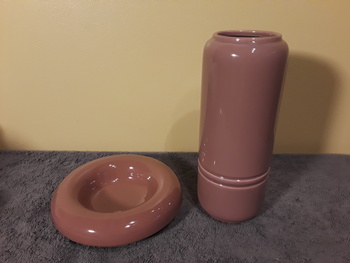 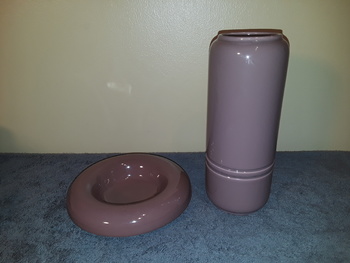 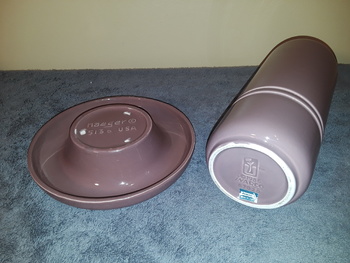 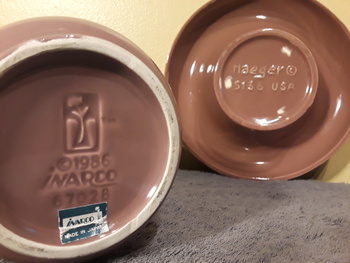 [subtitle: CRIPIES -- how did I suddenly become a "Haeger pottery collector"??]

These two (oh so close, but not quite?!) same-colored pieces came wrapped together from the junk store with the tall vase sitting in the shallow bowl -- thus the only marks I could see were the "HAEGER (c) 5136 USA" on the bottom of the bowl. For the ~$3 asking price, that was enough... ;-) :-) Once I got them home and unwrapped them (and as much as I'd been hoping the vase was another fun Haeger shape that I just hadn't seen before, which wouldn't be an unusual thing in itself) I found the vase is actually marked/labeled as by INARCO, their #67028, (c)1986, Made in Japan. And indeed, its color is ever-so-slightly different than the bowl -- a fact which shows much more plainly here in the artificially lit photos (which don't do true justice to the actual color of either piece) than in real life.

The INARCO vase is about 9" tall and 3-1/2" wide, with a basically cylindrical shape accented by a couple simple horizontal lines around it partway up its side. Initial looking around the internets hasn't yet revealed anything else even remotely like it, however does strongly suggest that INARCO might have been (or is?) much more well known for making ceramic "ladies' head" vases/pottery.

The HAEGER bowl/dish is about 7" across and 1-1/2" tall, featuring a wide rolled-edge shape. Initial searching about this one suggests it might have originally been the smallest (?) of a set of 3 'nesting bowls' which were made in many colors. I don't know how old is is (1960's-70's?) other than enough to have its name/# molded into its base, a characteristic which apparently disappeared in the later years of the Haeger Company. I also really don't know what this bowl (much less a set of 3 'nesting' ones like it) would have been intended to be used for, beyond 'shelf dressing'...??