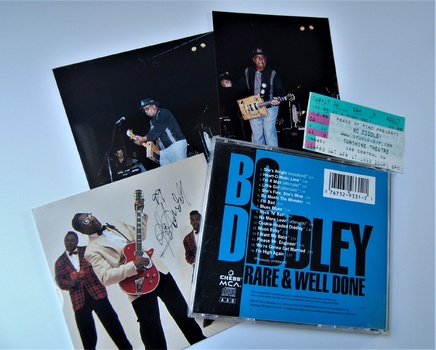 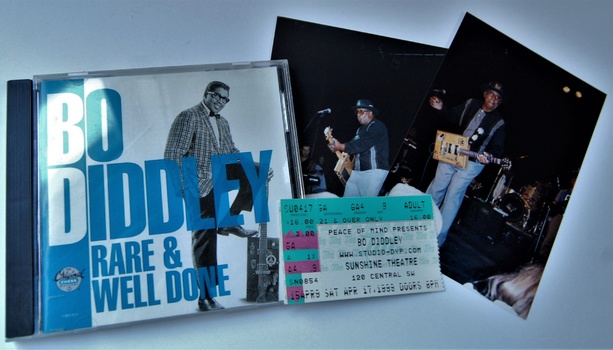 Bo Diddley (born Ellis McDaniel, 1928, d. 2005) was not quite an unsung hero of Rock and Roll, but he deserves to be right beside Chuck Berry as a guitar innovator and R&B songwriter who influenced all genres of Rock 'n Roll to follow. The Bo Diddley beat is forever ingrained in popular music. He named himself after the earliest American black folk instrument adapted from single and double stringed African instruments. Bailing wire would be wrapped around nails on a barn wall, tuned to fit the pitch of a singer's voice, and a bottleneck slide would accompany the first blues songs in America. That was the Diddley Bo. Diddley's roots lead from the Mississippi Delta to the groundbreaking Chicago Electric Blues sound of Chess Records artists.

Bo Diddley spent several years of his later life living in New Mexico, even becoming a sheriff of a small town there. He played a 2 hour set at the Sunshine Theater in Albuquerque, 1999, and I asked him to sign the liner notes of my rarities CD after the show. He looked over the track list and looked amused. Earlier, I had gotten some great poses of him strutting and playing his trademark "shave and a haircut, two bits" riffing. His music had changed quite a bit for his contemporary releases by then, but he had an awesome, positive message throughout his whole career, and he played a great selection from his early songbook that night. What a performer!

Bo was very friendly and conversational with the audience after extensive encores, and he seemed like such a nice, happy-go-lucky guy, and a really lighthearted performer. He was known also for a healthy dose of comedy interspersed between songs, almost like intermissions, where banter with his band mates was standard. He was true to form, with plenty of smiles for the audience

In contrast, a few years later I saw Chuck Berry on his 75th Birthday tour, with Little Richard doing a solo set with just his amazing vocals, accompanying himself on piano. Berry was notoriously unwilling to sign autographs. What was cool with Chuck Berry, though, was that he invited dozens of audience members on stage, and he continued to jam while hosting singalongs to end out his encores. It was still pretty great to be on stage with him, but for the life of me, I could not get him to sign a CD liner note for a Sun Records compilation of his early singles in between encores. He looked like he was having too much fun to think about scrawling a bunch of autographs in between chords. I feel blessed to have seen all those legends, in particular.