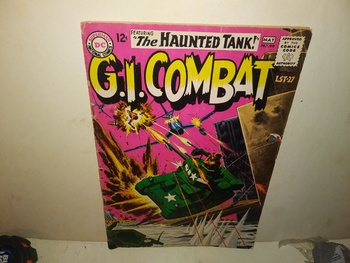 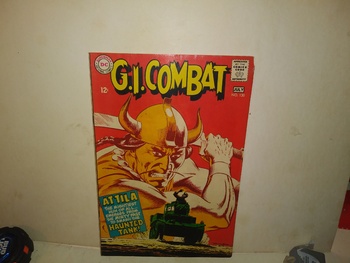 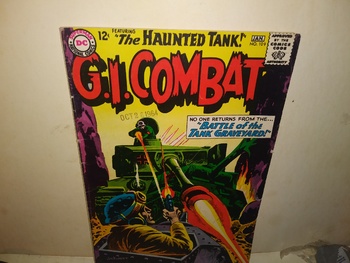 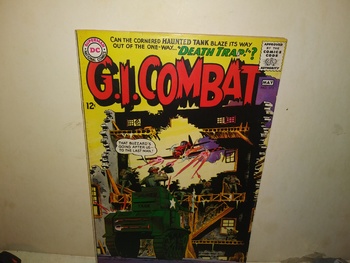 Got some more GI Combat comics to share. I loved the DC war comics of the 60's, great art and entertaining stories. Only EC had a stable of artists like them. The Haunted Tank was my favorite that had the Ghost of cavalry genius JEB Stuart being assigned to watch over a M3 Stuart(of course) with a name sake commander. These are well respected stories by many, good plots with heart. Being a Rebel it of course appealed to me.
The two best war artists(they had several good ones) were Joe Kubert and Russ Heath IMO. Kubert was great at capturing action, facial expressions etc. His military hardware lacked accuracy sometimes, but they never lacked heart and soul. His Stuka's were menacing birds of prey swooping down and the Tiger tanks were armor behemoths bearing down on the reader. Kubert's career dates back to the 40's Golden Age as a artist on Hawkman. His sons Adam and Andy are also well respected artists.
They both inked their own pencils.
Russ Heath may not have been as good at capturing the action or characters like Kubert but he never missed a rivet when he drew a weapon of war. He drew the best German tanks in the business, perfectly proportioned and detailed. He went on to be one of the artists on Little Annie Fannie in Playboy and did a lot of work at National Lampoon in the 70's. I met him at a Atlanta Dragon Con in the early 2000's.
I've 2 covers from each artist to share.
1. #99, Apr-May '63. First GI Combat and DC war comic I ever read. Heath cover art and still my favorite of the series. Story art by Kubert, the "Battle of the Thirsty Tanks" is a rip off of the movie Sahara written by Robert Kanigher.
2. #130, Jun-Jul '68. Another Heath cover beauty with Atilla menacing the Haunted Tank. Interior art by Heath also. Kanigher wrote 99.99% of the DC war stories, prolific writer is an understatement about him.
3. #109 Dec '64-Jan. '65. Kubert "grey tone" wash cover(DC did these type covers a lot during the early 60's on several titles). Kubert story art and writer Kanigher again of course.
4. #111 Apr-May '65. Kubert cover and story art. Kanigher(again) story.
Thank y'all,
Bill