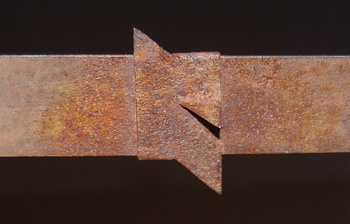 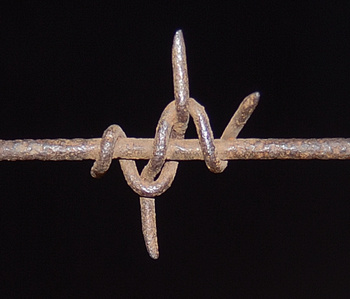 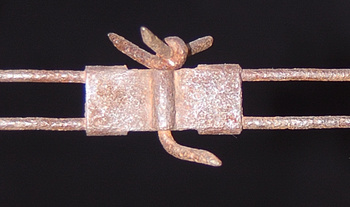 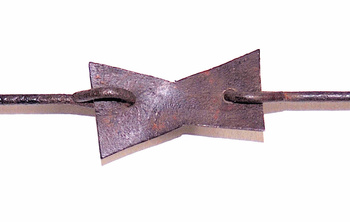 1) Hagemeier #1462 B Luepker Wide Ribbon. The ribbon is 1.25" wide with a four point sheet metal barb wrapped around it. Patented in 1914 by Jacob Luepker of Millstadt, Ill. A very rare wire with only a handful of specimens found.
2) Hagemeier #145 B Hill Pretzel Barb. A Single strand wire with a four point barb. Patented in 1876 by Peter Hill of Alto, Ill
3) Hagemeier #585 B Mouck Three to One Barb on Parallel Strands. Patented in 1893 by Solomon Mouck of Denver, CO. There is a flat ribbon version (#1462 B) and a third similar ribbon where Mouck collaborated with Constant Trevitt to produce another wire patent (#1657 B). I know of two versions of the first ribbon, one of which may be a reproduction. I have never seen an example of the latter.
4) Hagemeier #882 B Cook Perforated Double Fin Link Wire. Patented in 1892 by Joseph Cook of Chicago, Ill. I know of two sizes, small and large. My image is of the large version.