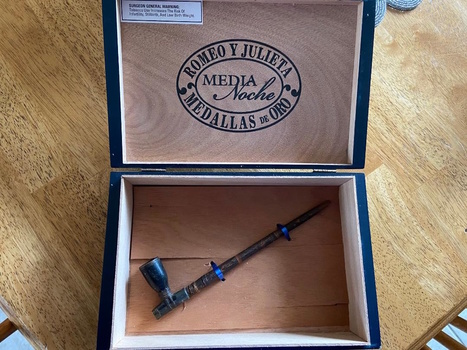 Hello all,
I acquired this from a friend. It was part of a collection that included mostly whaling and maritime artifacts that dated mostly from the late 19th century from New Bedford.
My research so far tells me it is that the bowl is slate or steatite. It is inlaid with two types of metals. The bowl rim and the end of the bottom cylinder appear to be bronze or brass. The piece that wraps the end of the cylinder is nailed together on the bottom. The cylinder is inlaid with what looks like lead or tin.
The bowl and cylinder are held together through drill holes in the bowl with some kind of braided cord. It appears that the same cord is used to hold the stem together. A couple of the bands are missing on the stem.
The whaling artifiacts seem to date to the late 19th century.
Happy to send more pictures if it will help to identify where/when it came from. It is not nearly as elaborate as some I have seen but the craftsmanship is outstanding.