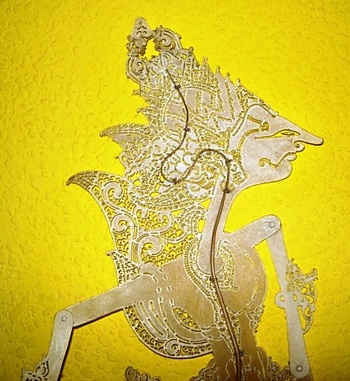 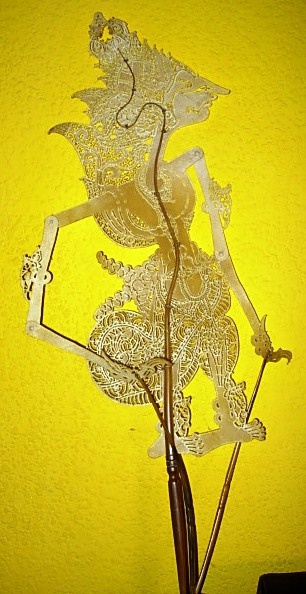 This is a Wayang Kulit or shadow puppet from Java. I found it in a consignment shop many, many years ago, and just plain and simple, fell in love. I didn't pay more than $5, since that is my own self-imposed limit, and has been for years. (it's getting harder and harder to find good stuff for that price...)

It is called the Wayang Kulit, and it is an ancient Indonesian art form. Wayang literally means shadow. Kulit means skin, and refers to the leather construction of the puppets that are carefully chiseled with very fine tools and supported with carefully shaped buffalo horn handles and control rods.
The puppets are set between a light and a thin screen and what you get to see, sitting before the screen, are their shadows.
Wayang Kulit did not originate in Indonesia; it was taken there by Hindu colonialists in the 8th or 9th century CE. The first performance of Wayang Kulit is mentioned in a 930 CE inscription which says “si Giligi mayawang” or “Sir Giligi played Wayang.” Apparently, this Sir Giligi was a famous wandering entertainer around those parts. The themes are almost always stories from ancient Indian epics, and they talk about ancient war heroes, gods, demons, and usually a princess in love with the wrong suiter.
The handwork involved in making a wayang kulit figure that is suitable for a performance takes several weeks, with the artists working together in groups. They start from master models (typically on paper) which are traced out onto kulit (skin or parchment), providing the figures with an outline and with indications of any holes that will need to be cut (such as for the mouth or eyes). The figures are then smoothed, usually with a glass bottle, and primed. The structure is inspected and eventually the details are worked through. A further smoothing follows before individual painting, which is undertaken by yet another craftsman. Finally, the movable parts (upper arms, lower arms with hands and the associated sticks for manipulation) mounted on the body, which has a central staff by which it is held. A crew makes up to ten figures at a time.