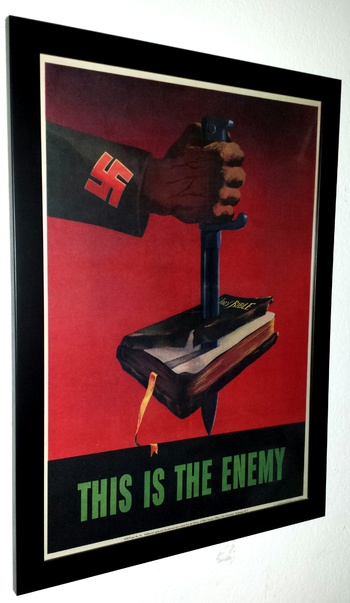 This is an original 1943 offset lithograph from my private WW II poster collection. This striking image is one of the most sought after WW II posters and highly collectible.

The poster image of a Nazi sticking a dagger through the Holy Bible portrays the anti-religious nature of the Nazi movement during the second World War. "This is the Enemy" clearly portrays the enemy as one who hated religion and killed Jews and other minorities. Freedom of religion is one of the cherished rights of Americans and a freedom not often honored by dictators or fascists. This poster symbolizes an important reason why we were fighting the Nazis in World War II.

This poster is in "A+" condition, I acquired it from a stack of found WW II posters that were covered with 8 inches of dust. It was one of many posters that laid flat in the crawl space of a California city hall waiting to be hanged since 1943, they were never used. This is poster #76 printed by the Office of War Information (OWI) in Washington, D.C.