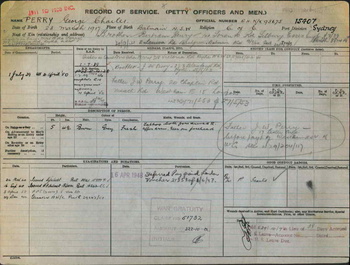 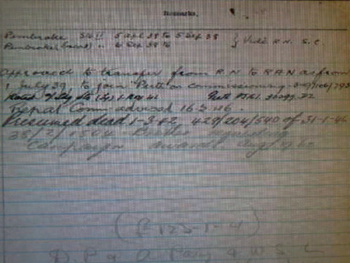 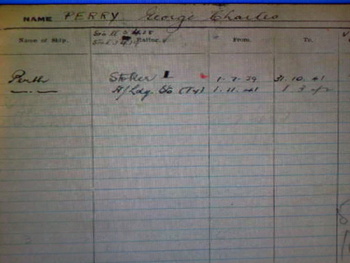 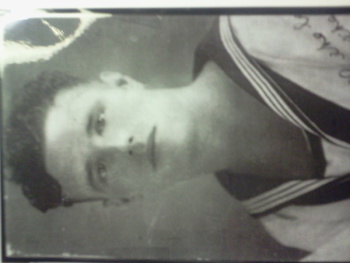 These are the service record of my Great Uncle George Perry, he was a Leading Stoker 1 in the Royal Australian Navy on the HMAS Perth. This ship was sunk on March 1 1942 by a series of Japanese torpedos in the Battle of Sunda Strait along with the USS Houston. Of the 681 men aboard 353 were killed, my uncle was one of them . The remaining 328 men were captured as POW,s and forced to build the Burma Railway, 106 of them died in captivity and 218 were repatriated after the wars end. My Uncle Joined the Royal Navy in 1938 when he was 21 yrs old in 1939 he requested a transfer to the Royal Australian Navy and was approved to transfer on July 1 1939 to the Perth on her commisioning he stayed with this ship thoughout her time at sea though many battles and honours including Atlantic and Malta Convoys and the evacuations of Greece and Crete before moving to the pacific and her final end .When my Uncle George was killed he was only 25 yrs old .He was one of 4 brothers of the other 3, the eldest joined the Australian Army serving in Libya as a "Rat of Tobruk" and the 2 remaining served in the Aust Merchant Navy . It is amazinging to me how much all these young men did in such short lives .With Remembrance Day approuching I thought this was an appropriate momento .I will try to get some better close up as well Thankyou