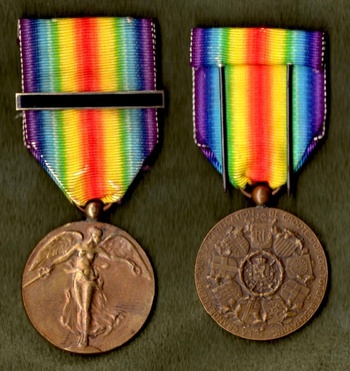 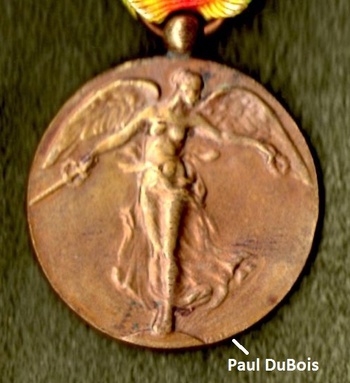 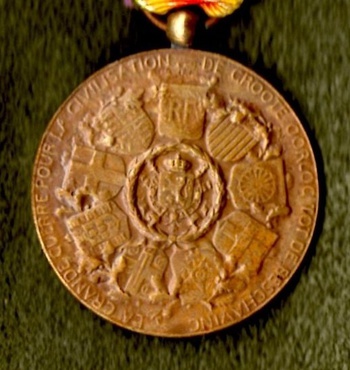 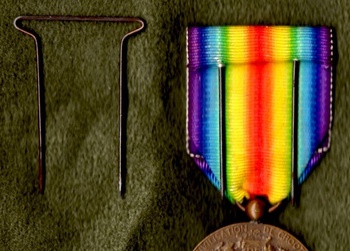 In 1914, Germany’s strategic plan for defeating France, the Schlieffen Plan, called attacking from the north by sweeping through neutral Belgium. King Albert of Belgium refused German demands to allow passage through his country, and the Belgian Army, outnumbered ten to one, managed to hold off the German offensive for almost a month. The Belgians were eventually pushed back to a small corner of their little country, but it gave Britain time to enter the war and together with France to prepare for a counter-offensive.

No more than 350,000 Belgian Victory Medals were issued. A small number until you realize that Belgium only had a population of 7.5 million and a pre-war Army of 43,000 men. The designer was Paul Dubois, a noted Belgian sculptor. The obverse has Victory with spread wings, standing on a globe. The reverse has the Belgian coat of arms in a central laurel wreath. Surrounding it are the shields of nine Allied countries. Around the medal's edge is the bilingual text "LA GRANDE GUERRE POUR LA CIVILISATION. DE GROOTE OORLOG TOT DE BESCHAVING" (“The great war for civilization” in French and Flemish). In 1920 a law granted mothers of soldiers who were killed in action permission to wear the medals of their sons. To these medals were added a symbol of mourning: a black enameled barrette with a silver frame attached to the center of the ribbon. This came to be known as “the mother’s bar”

The medal with the mother’s bar in the first photo and in the second and third photos is the official issue, manufactured by Establissements Jules Fonson. Designer “Paul DuBois” name appears on the front near the edge of the medal at about 5 o’clock (see arrow) On the right in the first photo is a contemporary unofficial issue that carries the Chobillon of Paris triangular Hallmark and the word “BRONZE” on the edge of the medal. Photo four shows the standard two prong device for attaching to medal.

When a Victory medal is also a valor medal:

For two countries, the Victory Medal could also be a Valor medal. For Great Britain, a soldier who was mentioned in dispatches of field commanders received a cluster of bronze oak leaves to wear on the suspension ribbon. Mention in Dispatches (MID) meant the soldier had distinguished himself, most often by an act of valor. In the US, a silver citation star was added to the victory medal ribbon as a citation for gallantry that did not merit the Distinguished Service Cross. In the 1930s, the Silver Citation Star became the Silver Star Medal.