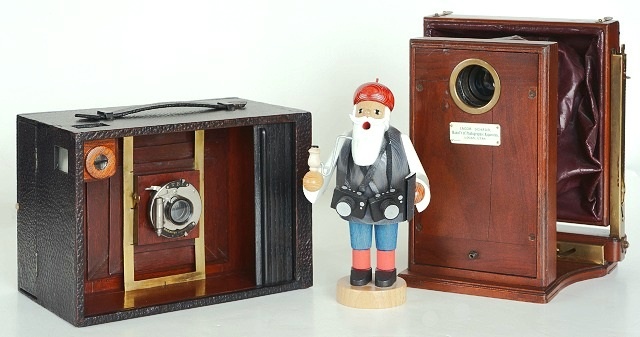 Just in time for the holidays, I somehow acquired two exceptionally rare cameras. So rare in fact, I never bothered mentioning these on my â€śMost Wantedâ€ť list because the odds of finding them were (for all practical purposes) nil.

As you can see, the big guy (Santa) is satisfied!

On the left is one of two known prototype cameras (1914) built by Harvey Wing (son of the legendary American builder Simon Wing). It comes from the original Wing-Nilsson estate (1970s) and was never marketed or sold. The camera shoots up to 9 images on a single 4x5 inch glass plate and is believed to be the last camera created by the legendary Wing family. It also has a unique sliding tambour door (built into the body) to encase the fine wood interior and lens / shutter. Electing to not sell this camera was likely a prudent business decision because by 1914, rollfilm was the norm and the first 35mm prototypes were a couple years away.

On the right is a c.1901 multiplying camera made by Jacob Schaub of Logan, Utah (a long way from the prominent east coast builders). Three cameras are known and this is the only example that makes up to 30 images on a 4x5 glass plate!

Unlike the Wing camera that shoots multiple images by shifting the lens vertically and horizontally, Schaub created a design with a fixed position lens and shifting back.

Whatâ€™s baffling is why Jacob bothered building this camera when other established makers were already selling competitive designs. According to Mike Kessler (one of the collecting greats) it might have been the father (Conrad, a civil engineer and talented machinist) who inspired the son.