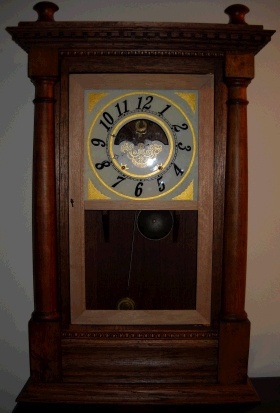 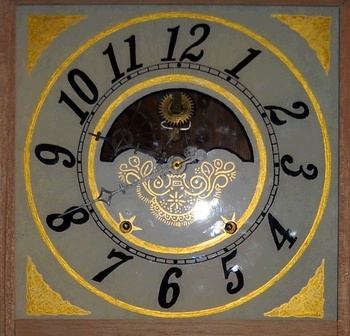 This clock is one I built, styled after the column and cornice clocks of the 1830's. The movement is a thirty-hour weight driven time and strike wooden movement that was from a David Dutton clock. He made clocks in Massachusetts in the 1830's. The photos were taken before I completed the door. It now has a mirror in the bottom panel. The other photo shows the reverse painted glass dial I made. I left the area just above the center of the dial unpainted to allow viewing of part of the movement. This open area is styled after the clocks of John Birge, which he originally left open so people could see the brass movement that he used in his clocks.

Even though the movement in this clock is around 175 years old, it keeps perfect time and strikes on the hour and the half hour on a cast iron bell. The pendulum bob is original to the movement. I built the clock case from mahogany and oak. I made the door hinges in the manner they would have been made back in the 1830's.

My next building project will be a Pillar and Scroll clock. I have a wooden movement that dates back to around 1823-1827 and made by Eli Terry & Sons that will be used in this clock project.