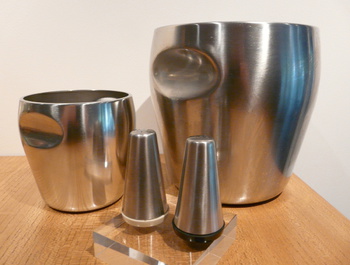 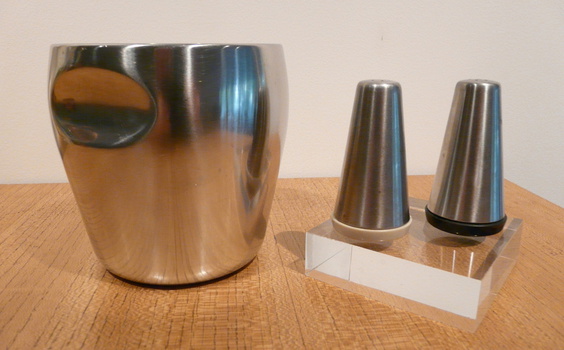 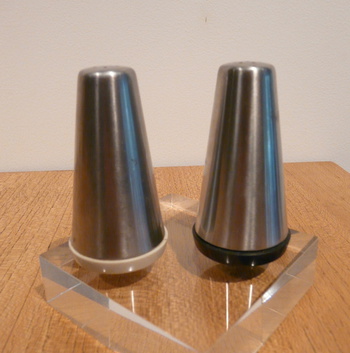 A few products together as a mini collection.
The ice bucket was bought last Sunday and the others over the last twelve months.
I am not sure who designed these early ALFRA salt and pepper shakers. ALFRA is a composite of two Italian words: AL = Alessi and FRA = Fratelli ( brothers). You will see it on its own as is the case with the mark on the bakelite stopper bases. Note that one is white and the other black. I bought them from a woman who told me she had bought them in the seventies and had used them at home until recently.

The large wine cooler and the ice-bucket are also marked Alfra. They date from 1976 and 1959 respectively and were designed by Luigi Massoni and Carlo Mazzeri.

Massoni Luigi
Luigi Massoni (Milan, 1930) designer and architect, was responsible for the A&D in Cermenate (Como). After a period of training at the Collettivo di Architettura in Milan and his first professional experiences between 1953 and 1955, he began his design career by making the cocktail shaker (1957, with Carlo Mazzeri) and the Serie 5 containers, which are still in production, for Alessi (V.). Between 1957 and 1960, with C.De Carli (V.) he contributed to the professional and production renewal, participating in various events and in the foundation of the magazine “Il Mobile Italiano” (V.). In 1959, by taking into partnership a group of furniture manufacturers, he became the organiser of the foundation of Mobilia (V.) and that same year he also joined Boffi (V.) as a production coordinator and designer, creating some of the first ever modular systems for the home and kitchen. It was from this experience that, still in his capacity as designer and art director, he enhanced the image of Poltrona Frau (V.)(1968-1976); Fratelli Guzzini (V.)(1963-1976), he designed the set of bowls Bolo cubo (1962) and the dinner service Vanessa (1969);iGuzzini (V.)(1965-1976), this relationship was later revived in the early 1990s, when he also worked with Cedit, Gabbianelli (V.), Sirrah (V.) and Venini (V.).

Mazzeri Carlo
Born in Oleggio (Novara) in 1927, Carlo Mazzeri graduated in architecture from the Istituto Universitario di Architettura in Venice in 1956 and, after an early collaboration with Carlo Scarpa in Venice, with the architect Mario Righini’s studio he took part in the competition for the Colonia Olivetti in Brusson and the Carrara Chamber of Commerce, and took one of the top places. In 1957 he designed the cocktail shaker “870” with Luigi Massoni, which was one of the first Alessi objects designed by external collaborators and which is still in production and can be found in bars worldwide. In the ‘60s and ‘70s with Anselmo Vitale he designed a complete collection of objects for Alessi which were primarily for use in the hotel industry. He was involved in civil and industrial construction, responsible among other things for the Alessi plant in Omegna (1960-1971), the Girmi electrical household appliances factory (1962) and the Lagostina offices (1964), which were also in Omegna, the renovation of the driers and the new warehouse for 3M Italia in Ferrania (1970) and the Salumificio Romano Mainelli in Oleggio (1972). In the field of industrial design he has also collaborated with Girmi, Lagostina, Bialetti, Indesit, Fonderie Filiberti and Triplex. In 1973 he opened a studio of architecture in Novara, becoming involved in civil architecture, restoration and town planning.