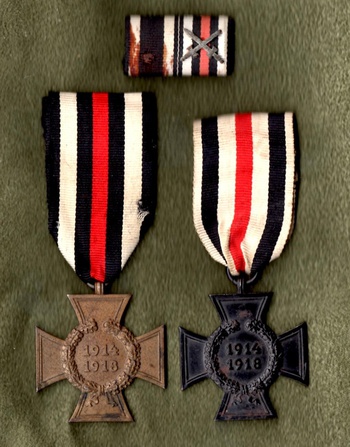 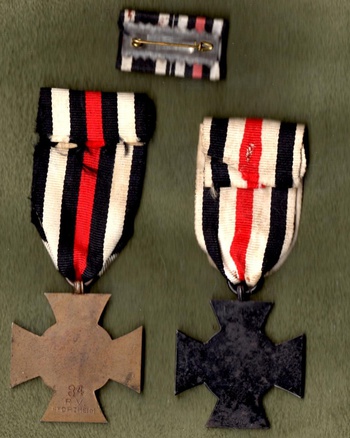 After seeing Dr. Rambow’s Cross of Honor, I thought I’d show the other two types he mentions.

Each of these medals had to be approved after reviewing supporting paperwork, and came with an urkunde, or certificate, signed by a local official. That’s an amazing amount of bureaucracy when you consider the sheer number of medals. In 1938, eligibility was extended to Germans in Austria and the Sudetenland.

Ehrenkreuz für Frontkämpfer (combatants cross) 6,202,883 awarded. Dr. Rambow has shown his, so I’ll just show the ribbon bar to the award, which also has swords. The other ribbon on the bar is the Iron Cross 2nd Class.

Ehrenkreuz für Hinterbliebene (commonly known as the “Widow’s Cross”) This was for widows and parents of those who died combat related deaths, died as a POW or were MIA – by then assumed dead) 345,132 awarded to widows and 372,950 to parents. In addition to being a blackened version of the non-combatant’s cross, the ribbon colors are reversed.