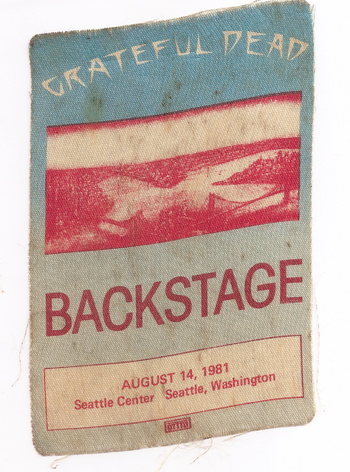 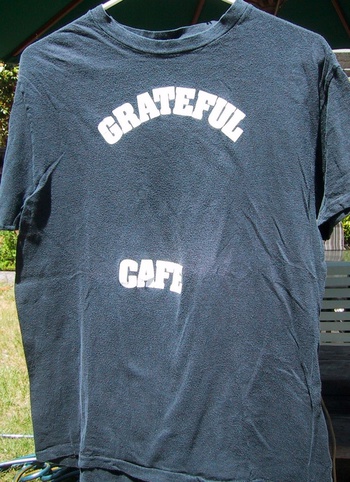 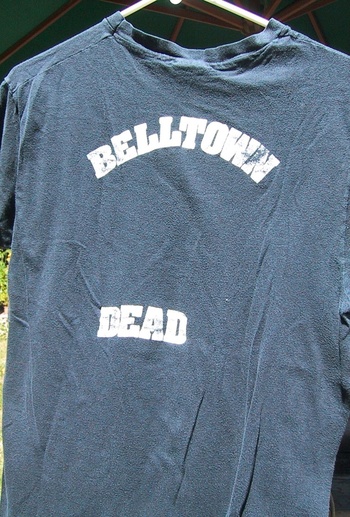 For a couple of years in a row, we catered for the Dead whenever they came to Seattle, where we had a cafe. One year, we made a t-shirt for the event, just to confuse the roadies, which seemed to work. I posted the shirt here some time ago, but only found the stained cloth stage pass this weekend while cleaning out the garage.

I had been a fan of these guys in the late 1960s, early 1970s, but had really stopped paying attention after '76, when I caught four nights of a six-night run at the Orpheum in San Francisco. So it was mostly for sentimental reasons that we did the catering, which was an enormous, thankless, pain in the butt. It was also really sad because Garcia was deep into heroin at the time, which cast a pall over the gig. I remember one roadie saying "I wish he'd come out of his room" meaning his dressing room, where Garcia would hole up for as long as he could. The other answered, "I wish he'd change his shirt." Somehow they'd eventually get him out of there and onto the stage; he'd smile sheepishly as he shuffled from the dressing room area to the stage, already a shadow of the gregarious guy I met backstage in Buffalo in 1973 (thanks Sparky!), but that's another story...