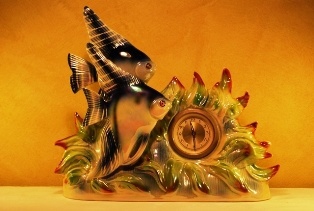 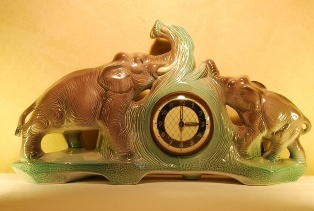 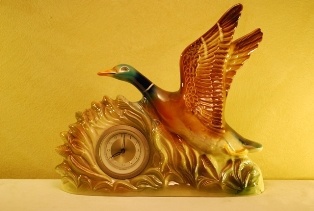 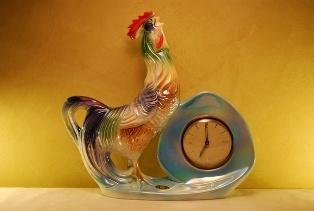 Jema Holland clocks were made in the 1940's & 50's by two brothers, "Jelis & Willem Mager" who bought the original Jema factory in the early 40's. The Magers did not actually register & commence business officially until 1945 but had been operating prior to that date due to WWII. In all they produced nearly 900 figurines, there staple income, however in there hey day they also produced 82 clock types & an unknown quantity of lamps ( see my lamps on here too). The clocks and lamps were produced during the time when Jema were at their peak production and without doubt were there most valued pieces. They were made in an incredibly diverse range of animals & creatures, were a basic cheap & affordable mantle or bedside table style clock that ran for only 30 hours before needing rewinding. I actually showcase my entire collection at my website www.jemaholland.com, which I constructed & own as I am such an avid collector & there is so little or really no other reliable source of Jema Holland information available. I have over the last 8 years or so been able to acquire 43 different clocks & have alsocompiled an extnsive database of all the different figurine types as well, I personally don't collect the figurines however they also are amazingly diverse in nature & give a unique view of the Jema Holland years of production when viewed as an entire collection, when you scoll through the hundreds of figurines it is clearly visible how this company went through a lifecycle of basic & simple figurines to the majesty of the clocks & lamps & finally into decline & then ultimately in the latter years the figurines were obviously made cheaper & with less pizazz until in 1984 the company went broke.