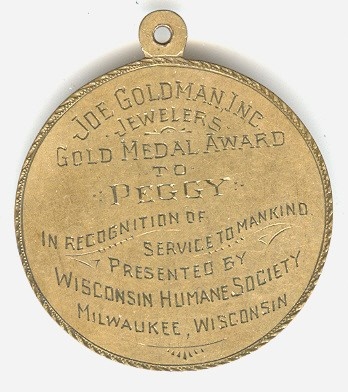 No I’m not being nasty, I really think Peggy was a dog and here’s why. A few years ago I bought this uniface medal which is gold clad copper and engraved “Joe Goldman Jewelers Gold Medal Award to “Peggy” in recognition of service to mankind Presented by Wisconsin Humane Society Milwaukee, Wisconsin” This tells us that Goldman sponsored the award and let the Wisconsin Humane Society award it as they saw fit. Goldman died in Jan. 1953 after more than 50 years as a Milwaukee Jeweler and had three stores in Milwaukee including one between 1st and 2nd street on Wisconsin Avenue which meant that he was a high end jeweler. When a medal is named only to a first name one must assume that it was awarded to a CIA agent or more likely a pet animal. Since it was awarded for service to mankind I would assume that it was awarded to a dog rather that a cat for obvious reasons. (Sorry Garfield) Goldman was in business under his own name since 1905 so I would guess this medal to be after that date and before WWII based on looks.