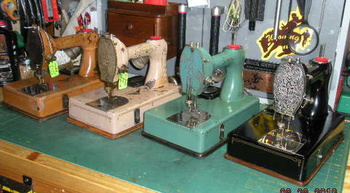 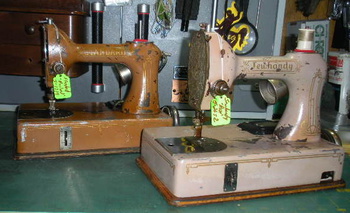 Pictured are four variations on the "Portable Sewhandy" sewing machine made between 1928 and 1938.
While appearing very similar to each other there were many evolutionary changes;
1) The "Dark Mustard" machine was marketed by the Standard Sewing Machine company. It was manufactured from early 1928 until August the same year. It had an aluminum base and weighed only 11 3/4 lbs.
2) The next example in "Light Rose" also had the aluminum base and was made from August 1928-Early 1929. The noticable changes were in the bed and arm decals.
3) The "Green" is the General Electric Model "A" version of the Sewhandy. It was manufactured from July 1931 until 1934. It has a cast iron base and weighs 15 lbs. (Only available in Green)
4) The 4th in "Black" is a fine example of the last of the "Sewhandys
manufactured by Singer under the name of "Osann" Company from 1934 to 1938.
5) We also found a 5th "Blue" (not pictures) but of the 2nd Variation Sewhandy (see #2 above)
6) Luckily we found and added another piece to our group . A 3rd Series "French Maroon"!. Yupp, all we need now is the "Red"....

The Singer "Featherweight began to be manufactured in the Fall of 1933 and the two overlapped for the next 4-5 years.
Much has been written comparing the two styles of machines and the features the "Featherweight" borrowed from the "Sewhandy"; the cases with trays, the enclosed bottoms, use of electricity and use of aluminum, and thus the portability, etc..
In collecting "Sewhandys" the challenge remains to find one in each of the variety of colors then available i.e., Mustard, Green, Blue, Rose, & Black and in finding examples with acceptable "CONDITION"...it's a "true" challenge! There appears to be no paint sealer or primer and paint loss is the rule rather than the exception. Original Owner's Manuals, attachments and original foot-controllers are also coveted.
We are proud to have added these to our collection!
Pam & J.C. Elliott 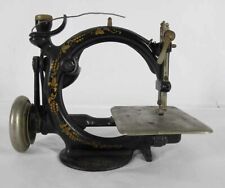