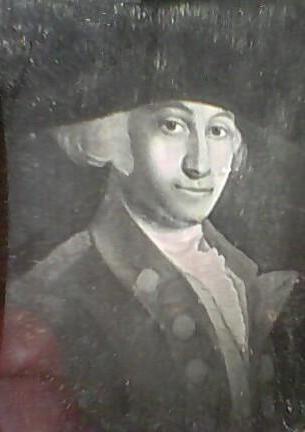 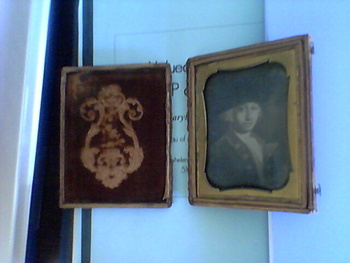 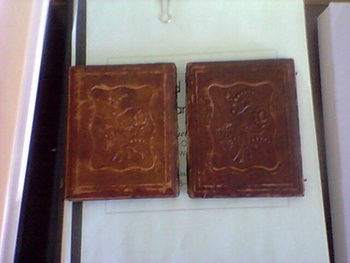 My 5th great-grandfather, Lieutenant Samuel Treat, served in the militia in Boston, and later at Castle William in Boston Harbor during and after the American Revolution. During this time, he sat for a portrait in his Continental Army uniform. In the 19th century, a daguerreotype was made of the original painting and has been handed down in our family through the years. I inherited it from my grandfather's estate in 2000.

The black and white photo is of the daguerreotype, and the color photo is a corrected and colorized version of the original portrait based on what I thought it may have looked like. I am very interested in finding out who bought it, where it is now, and who the original artist was.

From genealogical evidence, I believe the original portrait went from Lt. Treat to his daughter Abigail Thayer (Treat), then to his granddaughter Frances Loomis (Thayer). Frances had one child, Frederick Loomis, but this is where the trail went cold. Frederick never married, and I have no proof he ever owned it. It resurfaced 50 years later in the collection of Herbert R. Lawton of Boston, who sold it at auction as part of his collection in April of 1937. The trail goes cold again at this point.

I believe the dag may have been made at the request of Abigail Thayer's half-brother, Lucuis Junius Brutus Treat, as it has come down to me from this branch of my family.

I've added pictures of the case. It's leather with an embossed floral pattern on both sides. The image on the velvet insert on the inside of the front of the case is a lyre featuring elaborate scrollwork. Based on the mat and preserver alone, I suspect it dates back to the early 1850s. I'm almost positive it was made in the Boston area, but I can't find any markings on it to indicate who made it. I know Southworth and Hawes was well-known at the time, but I know there were others operating around that time.