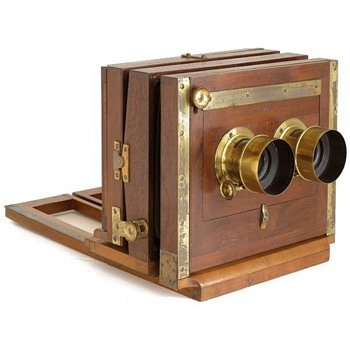 Since there are a lot of stereoviews being shown, I thought everyone might like to see the style of camera photographers used to make these types of pictures.

This is a late 1860s field camera made by John Stock in the American Optical Company's factory. It is an earlier American camera of a heavier design that made images using the wet collodion process. The plate format is 5" x 8" whereby two images would be exposed at the same time.

American wet plate stereo field cameras are rare. By the mid-1870s, these cameras became less 'robust' because a dry plate process could be used (no messy chemistry to prepare in the field) and stereo photography became more easily accessible because it was simpler. By the turn of the century, rollfilm based stereo cameras were common.