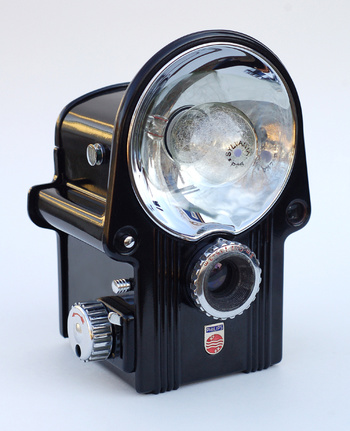 No doubt you are familiar with Philips, one of the largest electronics companies in the world. Way back in 1950, they manufactured this beautiful bakelite camera for 6cm square exposures on 620 film.
The design, with its integrated flash reflector, is quite similar to the Spartus Press Flash, but this camera is far more scarce.

The "Philips shield" logo, seen below the lens, made its first appearance in 1938. As the company was primarily known for its radios at the time, the wavy lines are meant to represent radio waves, while the stars represent the evening sky through which the radio waves would travel.
____________
See also the Spartus Press Flash:
http://www.collectorsweekly.com/stories/18977-spartus-press-flash