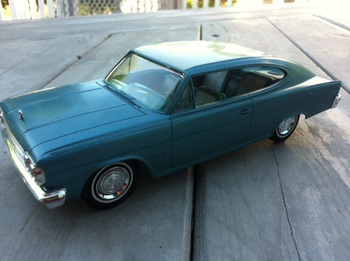 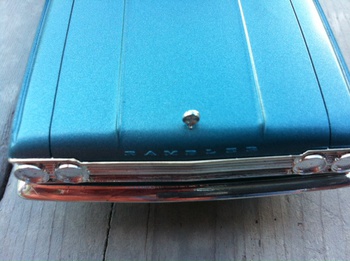 Have you ever wondered why a certain car didn't meet expectations and became just a footnote? Such is the case for American Motors's Marlin. This "Man Size Fastback" as AMC called it in ads was not the original concept. Designed by AMC's famous designer Dick Teague chose the Rambler American chassis (106 inches) and created the Tarpon in 1964 hoping to fend off the soon to come Ford Mustang. Remember, Ford made the Mustang off the Falcon chassis.

The Tarpon generated wide interest as it toured the auto show circuit starting in January 1964. I saw it at the Chicago Auto Show and it was well received before the so-called "pony car" market segment was established. The Tarpon appeared together with the Mustang II (a concept design shown before the production version was unveiled) at the 1964 New York International Auto Show. Great looking car. So here's why it did not go into production. AMC could not get their current small block V8 in it and thought a 6 would not be enough. Even though engineers in Kenosha were able to fit one in, then president Roy Abernathy decided to go with more power and luxury. Against Teague's advice AMC utilized the Classic chassis (112 inches) and the Marlin was born.

AMC billed the Marlin as a new addition to the company’s self-styled “Sensible Spectaculars” model line and instead of competing with the Barracuda, it went head to head with the Charger. Backed by extensive advertising and merchandising, the car was officially announced on February 10, 1965, and unveiled in Rambler dealer showrooms on March 19. Teague was still not happy since the proportions were all off and was able to address that for the 1966 model based on the longer Ambassador chassis (118 inches) but in the end, consumers voted with their wallets and just over 14,000 were produced. Gaining interest, a rust-free car can be bought in the $15-20,000 range.

Jo-Han made promo models for both years. There was also a friction model. Many of these promo models were done in aqua/dark blue two-tone plastic. Like the real car, AMC dealers could not give these away to customers. As the 1966 model year neared its end, thousands of the models were given away to institutions such as children's hospitals and orphan's homes.

My example here is a '66, metallic aqua with a white roof. This car is mint. No scratches, the chrome is good and most important, the emblem is still on the hood. They are very easy to break off and without the emblem, the value drops. Good luck at finding these as they are now highly desirable and command premium prices, upwards of $200 to 400 for mint, in-the-box specimens that still have the hood ornament.

Go check out my other posts about promo models on SavageOnWheels.com