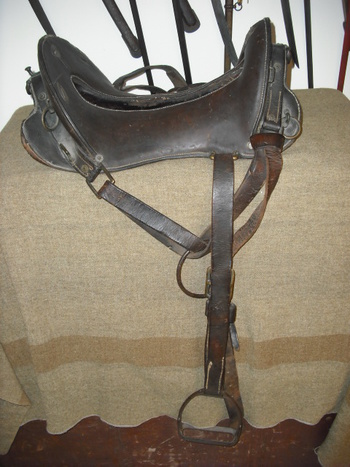 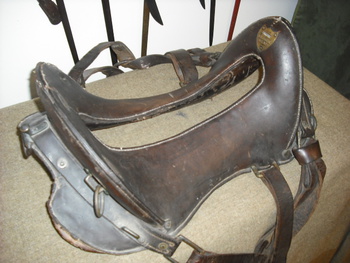 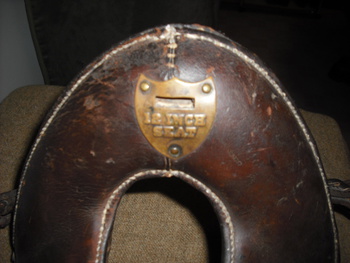 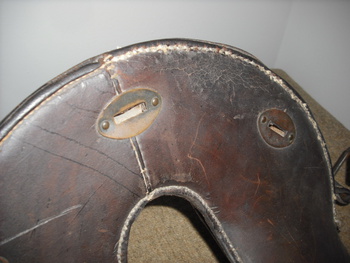 The McClellan Saddle was designed by the same George B. McClellan who would later rise to command the Army of the Potomac during the American Civil War. McClellan said he based his design on military saddles he studied as an observer in the Crimean war; however, it most closely resembles the Spanish tree saddle commonly used in Mexico. McClellan had also served in Mexico, and may have been influenced by what he saw there. His saddle design was adopted by the US Army in 1859, and various models of the McClellan have been used from the Civil War through the end of the horse Cavalry.

The McClellan saddle I’ve posted is the Model 1904. Although the Army produced a new pack saddle in 1913, and a special War contract saddle in 1917 (both based on the McClellan design) It was the Model 1904 that most American military horsemen were using through WWI. The signature hole in the middle made the rig lighter and also made it more comfortable for the horse. My saddle still has the straps for the cincha and the stirrup straps, as well as the iron stirrups.

This particular saddle had been slowly rotting away in a barn in central Texas, when a friend of a friend found it in the 1980s. The friend was also a collector, and he traded it to me. At the time, leather was dried and cracking, some of it rotted away on the underside. The stitching had also rotted away and the adjoining leather had peeled back and shrunk. It was in no condition to put on display, so with little money at the time, I opted to go for restoring it the best I could. It took a lot of time and a LOT of Lexol leather conditioner to get the leather pliable. No new leather was added, and the stitching was done with waxed cotton thread (no fluorescing under black light). I needed the expertise and equipment of a shoe repair guy I knew who had an interest in old leather items. As you can see in the close-ups, the repair work is far from perfect, but it’s about the best I could get done