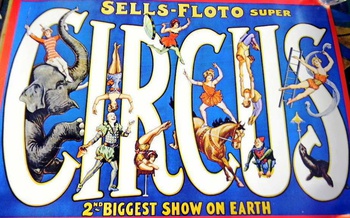 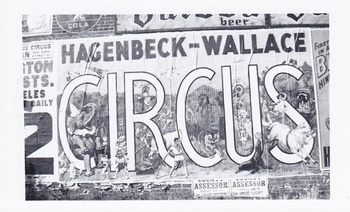 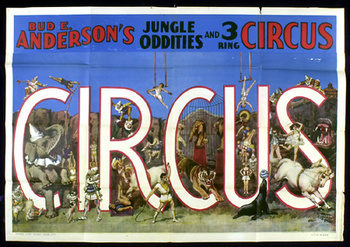 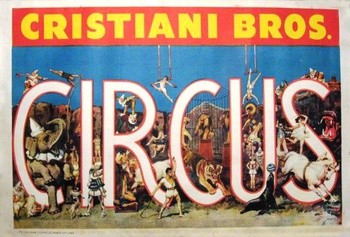 In about 1920 the Strobridge Litho Company in Cincinnati created a number of new images for the Sells Floto Circus. This particular poster uses a theme which was reproduced several times over the next few decades and used by a variety of shows.

The graphic shows various animals, performers, etc inside the word CIRCUS - a very appealing and unique presentation. Although the artists at Strobridge did not sign their work, during this period an artist named Frank Hoban was on staff there. He moved his family to Chicago shortly after and illustrated a few posters that he signed - including a take-off on this image that was created for Hagenbeck Wallace in 1938 by the Temple Litho Co (later Central Show Print) of Mason City Iowa. One has to wonder if Hoban created the original for Sells-Floto, or if he just took the idea with him when he created his version - seen below. Incidentally - although the Sells-Floto version has been reproduced in recent years, an original of this image is quite scarce.

In the second photo, you can see a portion of the billposters "daub" from 1938. This is one of the last billing stands ever for the Hagenbeck Wallace Circus - promoting its performances at the Washington and Hill lot in Los Angeles. As mentiond above, the basic design for this 12-sheet was later used by various circuses into the 1960s. You can see a bit of another litho promoting "Blacaman" the animal "hypnotist" who was a featured attraction during the final season of the Hagenbeck-Wallace show.

The third litho, for the Bud Anderson Circus of about 1942, had that show title pasted over what is probably Hagenbeck Wallace - taken from what was left on the shelves at Temple/Central Show Print when Hagenbeck Wallace closed in 1938.

By the time that Cristiani Bros used this one sheet in the late 1950s, this stock image, produced by the Central Show Print company of Mason City, Iowa had been used by a number of shows, including Daley Bros and Zallee Bros.