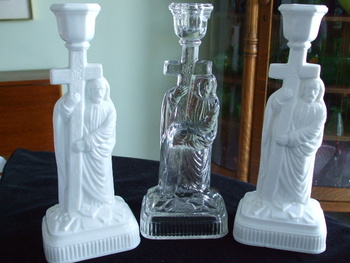 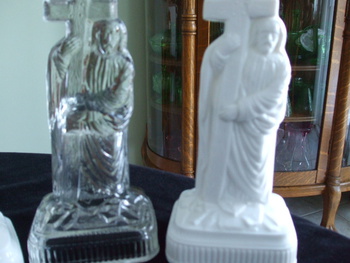 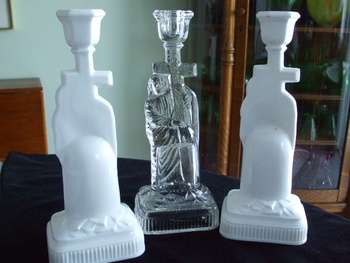 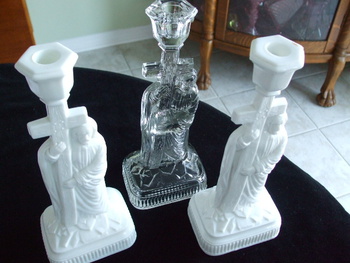 I've had these Candlesticks for years and when the Felt & Stoer "The Glass Candlestick Book" Series came out a few years back, I was able to ID them properly. The Opal Candlesticks shown were originally made by Chalinor, Taylor Co. between 1884-1891 in Opaque Blue, Opal and Clear. After 1891 and until 1893 when the U.S. Glass Factory C was destroyed by fire, the production was limited to Opal and Crystal. Like many of the Crucifix Candlesticks made by American Glass Companies, they are more often found in the Fervently Catholic Province of Quebec and were probably sold door to door to the residents of the province. Most households of the 18th-19th Centuries in Quebec had Crucifix Candlesticks of all kinds, at the ready, for prayer or preparation for death rituals. Atterbury, Westmoreland, Hobbs, Brockunier & Co., Boston & Sandwich Glass Co. Gillinder, Imperial, Fostoria , Cambridge were other companies making Candlesticks that sold readily in Quebec and the Eastern Provinces. RER (LOUMANAL) 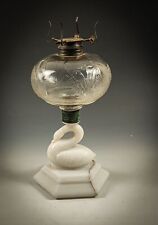 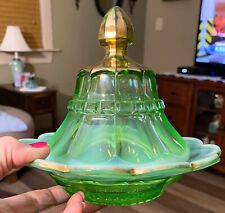