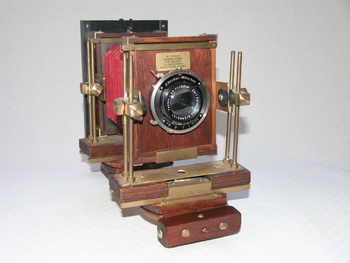 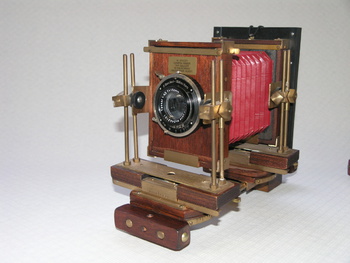 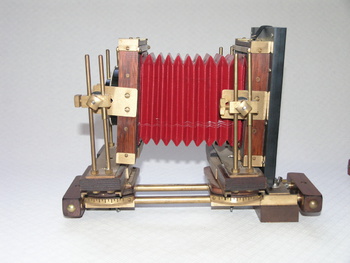 Labelled "W.Stacey, Camera Maker, The Gallery, 15, Churchway, Haddenham, Buckinghamshire", this camera was hand made by one man from start to finish, in 1985, and is well too modern for my usual parameters. It has an associated letter (something you don't tend to get with my usual 19thC. cameras), from William (Bill) Stacey to the original purchaser, dated 21st. June, 1985, advising him on the choice of lens, and offering as the standard new lens, a Schneider Xenar 150mm., which on this camera would have been a mild telephoto. It came to me without a lens and I have fitted a 135mm Zeiss Tessar, f/4.5. The camera is of a highly idiosyncratic design, for use only on a stand, in what looks like rosewood, using a series of vertical brass rods and a dual "monorail" as mounting points for most movements you might expect on a technical camera. Bill has worked around the total unavailability of brass camera fittings in 1985, (as now), by devising his own ingenious system. I have seen one other previously, about twenty years ago at a camera fair in the North of England, and I suspect that Bill's lifetime's output is very small, although he did take the trouble to have maker's labels printed. I am still researching him.