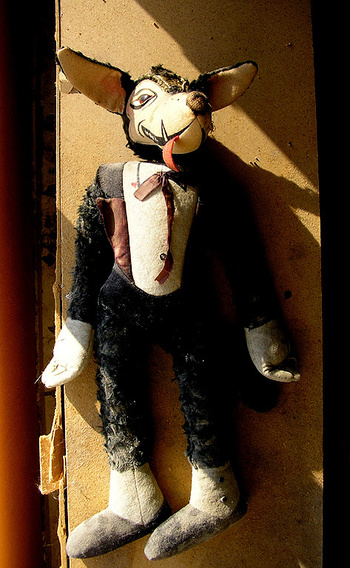 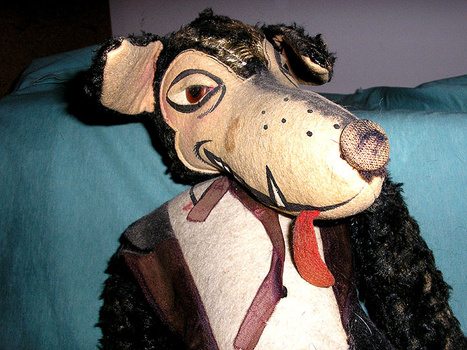 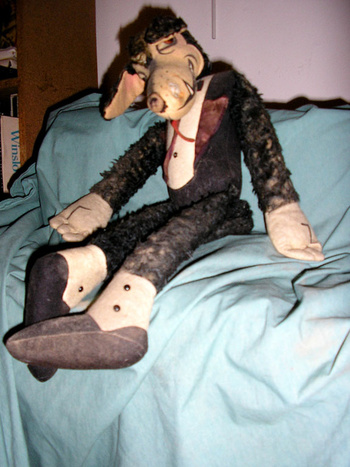 Have you ever seen this "Drunk Wolf" doll before?
In researching it I sent a photo to the Warner Bros. / MGM archives to
see if it may be a "Tex Avery Wolf Doll" from the classic cartoons like "Red Hot Riding Hood" but Leith Adams said he did not recognize it. Dave Smith at the Disney Archives was also unable to identify it. I have
seen two other copies of this same doll but the owners had no idea where it came from. One of the copies of the doll had a martini glass in its hand and a hat on its head. I speculate that it could be a "Prototype" of a character doll from the 1930's or 1940's that was produced in a limited quantity.
I just found another copy of this same wolf. http://www.worthpoint.com/worthopedia/fantastic-disney-big-bad-wolf-character-doll I forwarded this ad to Disney and again they said it is not theirs. Why would the Big Bad Wolf wear a tuxedo?

This doll stands 18" tall, his head and body are stuffed with cork.
His face, chest, hands and shoes are made of cork packed felt. The fur, I think, is wool. The features of his teeth, mouth and other line detail appear to be painted on. I think his eyes are glass.

Any information or ideas of the origin of this doll would be greatly
appreciated.