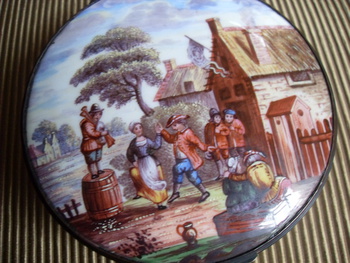 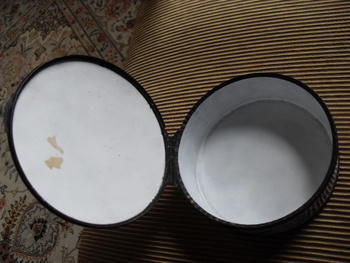 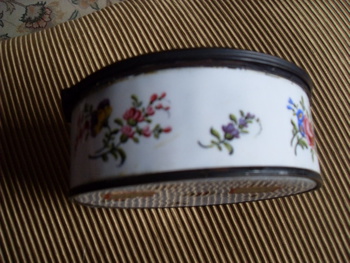 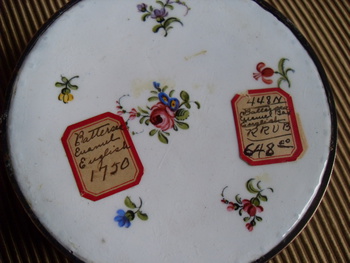 This batterea enamel box, measuring 5 inches in diameter by, 2 1/4 inches tall, is transfered and after painted beautifully with a country landscape. HISTORY OF BATTEREA /BILSTON ENAMEL WARE.

Bilston Enamels
The small enamel box is often said to be the most appealing and delightful product from Georgian craftsmen.

Trinkets for the wealthy
The boxes were initially used by the wealthy to carry snuff or beauty patches. Made of gold and enamel by jewellers and goldsmiths of London and Paris, they were however out of reach of the majority of merchant shopkeepers who were aspiring to follow the fashion scene.

These enamel objects were called Battersea Ware and in some cases they still are. This is because of the factory of Steven Jansenn set up in Battersea, London, in 1753.

Many pieces of enamel were wrongly attributed to this factory which was only in existence until January 1756 when Jansenn went bankrupt.

The industry in Bilston
Enameling in Bilston began around 1745 when a number of French Huguenot refugees, fleeing religious persecution, settled there. The earliest known enameller was Dovey Hawkesford who died in 1749.

Isaac Beckett had his workshop in Duck Lane (now Queen Street). He is known to have made considerable use of transfer printing on enamel boxes.

Smaller enamellers would send their enamel blanks for decorating by transfer printing and over painting.

The Bilston enameling industry was still vigorous in the early 1800's, though the artistic quality had fallen. By the 1820's however the industry was experiencing economic difficulties. Enamels were going out of fashion and were being replaced by glass, ceramics and metal goods. Also, the demand for small boxes for snuff-taking was falling.

By the 1850's there were no makers of small enamels left in Bilston.

20th century revival
In the 1960's the art and manufacture of Bilston enamels returned when a company was formed to produce the goods in the town.

The company is still in existence today producing fine Bilston enamelware sought after all over the world, recreating a traditional industry back in its home town.