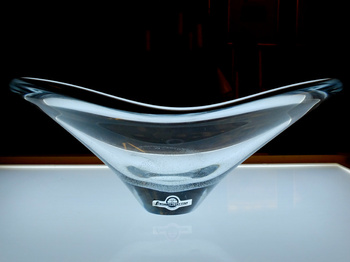 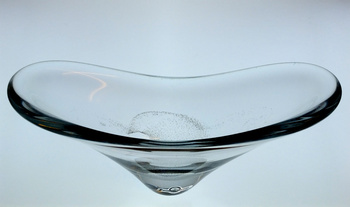 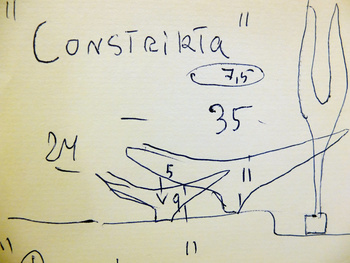 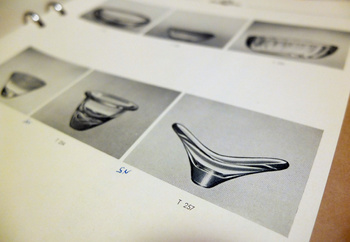 A working drawing is preserved for the model. Nylund states there height 5cm (center) 9cm (ends), width 7.5 cm and length 24cm. While a larger model with a length of 35cm. But the catalog from 1954 has only one size (110 x 240 mm) that also corresponds quite well with my piece here (105 x 250 mm). Perhaps the model were produced in several sizes before or after 1954? The sketch must be seen as purely working material, not a drawing for production. It is quite simple done, but the final name of this bowl, Constricta, became just as Nylund stated in this drawing.

The shape is typical of its time in the beginning of the 1950s. Kedelv-Flygsfors and Lindstrand-Kosta drew similar models with upturned edges during the 1950s. Methods, formes and techniques spread between the glassworks, and they were inspired by one another without being necessary to plagiarize. Which producer/artist who was the first to use a particular shape or method is difficult to say for sure.

My Constricta has a pattern of fine powder in the bottom, perhaps unmelted glass sand or something like that?