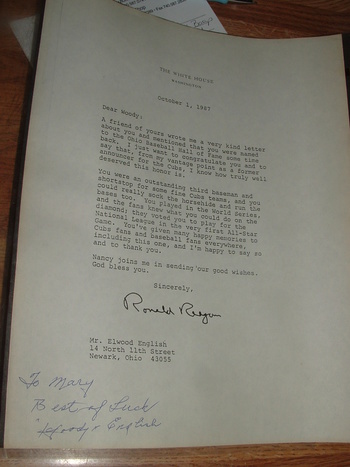 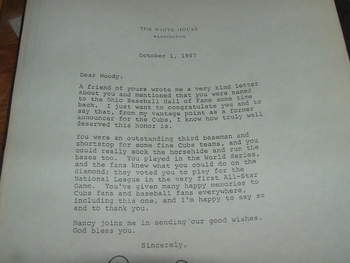 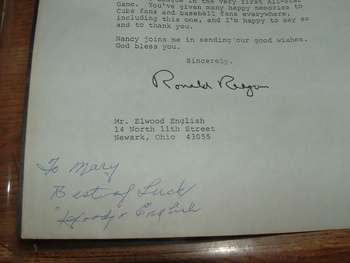 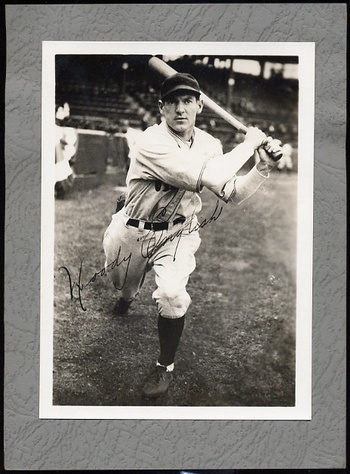 Woody English was a close personal friend of the family, and dated a cousin until her death some years back. He knew my Mother collected Political items, and had many white house letters, so he presented this to Mom putting his own autograph on it. Perhaps little known to some he was a famous guy here. A real sweetheart with large hands, and a large heart. He very kindly signed some baseball cards for my boys as well. I'm getting ready to frame this for my oldest, he is of the age for it to go to him.

Elwood "Woody" George English was born on March 2, 1907 in Ferdonia, a small town in Licking County Ohio. Woody attended Newark High School, located in the county seat of Licking county, In 1924, he tried out for Hamilton and Zanesville baseball teams but did not get his first professional job until 1925 with the Toledo Mud Hens. His primary defensive position was short stop and his batting average that year was .220. The following year, Woody had a good season, compiling a .301 batting average and leading the American Association in total chances at shortstop.

Woody's efforts did not go unnoticed by major league teams. In 1926, the Chicago Cubs paid $50,000 to the Mud Hens for Woody. In his debut year, Woody appeared in 87 games batting .290 with 97 hits, 14 doubles, and 28 runs batted in. The following year, 1928, Woody replaced Jimmy Cooney at short stop and remained a starter until 1932. He shared the duties at short stop with Billy Jurges. However, Woody had over twice as many plate appearances and moved back into the starting in 1933 and 1934 after moving to third base replacing Stan Hack.

One of Woody's the greatest achievements was being selected and playing in the first ever Major League All-Star game on July 6, 1933 at Comiskey Park in Chicago as part of the Worlds Fair. The American League won on the strength of Babe Ruth's home run. Woody also played in two Major League World Series with the Chicago Cubs, unfortunately loosing both.

In 1935, Freddie Lindstrom came over from Pittsburgh Pirates taking over duties at third base. Woody became a utility player in that year appearing in only 34 games and slumpimg to his worst year in offence with a .202 batting average. In 1936, he played in 64 games, 42 times as short stop, 17 times as third basemen, and one appearance as second basemen. He bounced back with a .247 batting average.