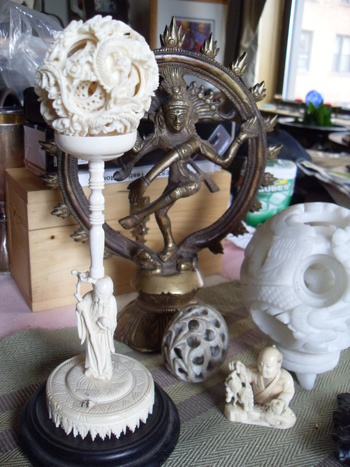 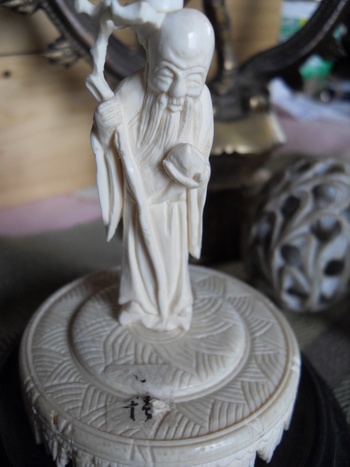 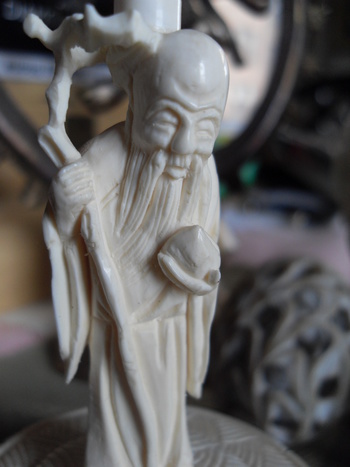 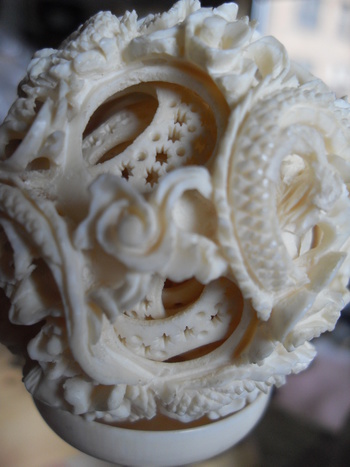 This antique Chinese puzzle was located in New York City's South Bronx Catholic Charities. I think it was a great find in that it is in excellent condition. It can be classified as a Antique Chinese Elephant Ivory Carving Dragon Puzzle Ball with Nine Levels on Puzzle Ball Plinth, China. Circa: 20th Century Plint: H 8 in.W 2 3/8 in.D 2.75 in; Ball: 2 1/4 in. diameter. O.A. Height: 8 in. and Condition: Excellent!

By the end of the end of the 18th C. westerners had been exposed to the amazing skills with which the Chinese had been able to carve Elephant Ivory's through the items brought back during the China Trade Era.

The skill with which they were executed was unsurpassed any where in the world including Japan, long known for fine Ivory carvings. These stunningly fine works were the result of 2,000 years of evolution, trial and error thousands of different types of tools have been developed just for this craft. Eventually these objects were fashioned into finely worked Imperial fans adorned with exotic elements such as carved Horn bill with Enamel handles.
Song Dynasty to Yuan Dynasty (907-1368 A.D.)
This was an interesting period for one significant reason, during the Song and Yuan Dynasties numerous written records exist about the importation Ivory and the establishment and maintaining of carving workshops. How Ivory was used has also been written about extensively during this time, yet no one single example has been found in either the Northern or Southern Song sites. None! While some wooden and bamboo carvings have been found, the dearth of Ivory examples is astounding.
By the end of the Qianlong period Ivory carving had become perhaps the most finely worked of any carving ever known. The work included the making of baskets, all carved by hand with such fineness they resembled the screen you would have on a window. These were not woven, but were actually carved. Buyer's in the west marveled at the quality of these works and bought them en-masse. From sewing sets, to card holders, buttons, chess sets, elaborately inlaid boxes and furniture, calling card cases, fans, puzzle balls, doll heads, as well as using the superb surface ivory provided for painting miniatures, which were most often small portraits and Hong Scenes.During the Qing Dynasty Ivory Carving became much more technically developed reaching new heights during the reign of the Qianlong Emperor (1735-1796). By then China was a booming world power in trade. On a weekly basis ships from Europe were moving in and out of Chinese ports trading gold for silks, tea spices, porcelain, cotton and almost anything else they could buy to satisfy the home markets. These traders built upon the enterprises of previous traders building a trade route and business network like nothing ever before seen in human history. The result? an even more massive demand for Asian goods by the west. By the second half of the 18th C. the American colonies were among the buyers as well, with Salem, Massachusetts being among the most important by 1800. At one point Salem has so many ships going to China, the Chinese thought that Salem was a country.

I welcome any and all information pertaining to this item 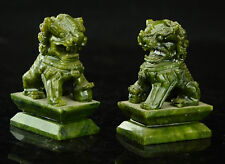 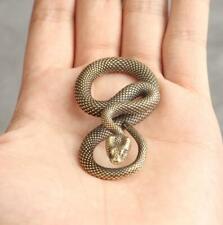